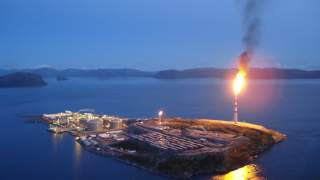 The U.S. and China recently agreed to a major liquid natural gas (LNG) trade deal, which could generate $26 billion annually for America.

The Department of Commerce announced a 100-day action plan to allow Chinese companies to negotiate long-term contracts from American suppliers. The energy firm Wood Mackenzie estimates this deal could pump $26 billion into the U.S. economy each year by 2030.

“This is good news for US energy exports in the future, but it is only the first step,” Richard Kauzlarich, former U.S. ambassador to Azerbaijan and Bosnia and a professor at George Mason University, told The Daily Caller News Foundation. “First, LNG exports will require long-term contracts with U.S. producers/exporters. The Chinese have proven to be tough bargainers in the energy area – ask the Russians.”

China’s dramatic economic growth over the last decade has fueled its lust for oil and LNG. Rising demand has long surpassed Chinese energy production capabilities. As China’s need for oil and LNG imports rises, its dependence on the U.S. hydraulic fracturing, or fracking, boom has increased.

“I am not shocked that China, an emerging U.S. rival in Asia and indeed throughout the world, would turn to Washington for more and more LNG, and more broadly, more natural resources,” Harry J. Kazianis, director of defense studies at the Center for the National Interest, told TheDCNF. “Chinese officials have told me time and time again that they need to diversify where they get their energy from. They fear being overly dependent on any one source, or even any one continent, for their natural resource needs.”

China is now the largest foreign buyer of U.S. oil, according to new data from the U.S. Energy Information Administration. U.S. crude oil exports in February jumped 35 percent as China started buying American oil. The country surpassed the U.S. as the world’s largest net importer of petroleum in 2013.

“Second, is U.S. gas infrastructure (pipelines and export facilities including gas liquefaction capacity) adequate to handle significant exports to China?” Kauzlarich asked. “US pipeline infrastructure needs both modernization of existing facilities and new investment to realize the potential for US gas exports.”

China is expected to buy roughly 70 percent of its oil from foreign sources over the next few decades, largely from unstable parts of the world.

“In fact, in the months and years to come, I can see Beijing purchasing more and more U.S. natural resources — and that is a good thing for U.S. suppliers too, in that Washington also should have diversified purchases from around the globe,” Kazianis said. “It is a win win for everyone and a reason for America and China to find common ground on strategic issues that divide them.”

“Bottom line: the potential is there for significant LNG exports in the future but … will the Chinese pay the right price for the US producers/exporters to make the Chinese market profitable, and will the US have the necessary infrastructure to make this possible?” Kauzlarich asked.

The former ambassador previously told TheDCNF that China will continue importing LNG and oil, but he isn’t sure if it will accept its rising dependence on U.S. energy. China’s own fracking revolution stalled due to the poor quality of its shale reserves. Though China’s shale reserves are large, they are prohibitively expensive and technically difficult to extract, being economically recoverable at a shockingly high $345 a barrel.

U.S. consumers face minimal costs to export LNG and pocket huge economic benefits, according to a study the Department of Energy published in December 2015. The study found exporting American LNG would provide huge environmental benefits as well. The report states exporting LNG will help “address a variety of environmental concerns in the power‐generation sector.”

Exporting natural gas is likely to be a growth industry, as global demand for natural gas is expected to be 50 percent higher by 2035 than it is now, according to the International Energy Agency.