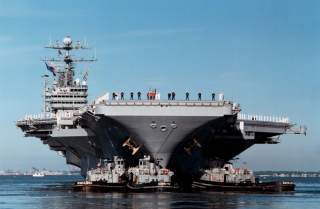 A war between the United States and China would cause severe losses on both sides, but—today at least—Beijing would bear the brunt of the casualties. However, as China’s anti-access/area denial (A2/AD) capabilities continue to improve—the balance of losses would shift more towards Beijing’s favor by 2025. Nonetheless, China would still suffer more losses than Washington even at that stage—according to a new report from the RAND Corporation. Victory for either side might prove to be elusive as the conflict could degenerate into inconclusive bloodletting.

“As its military advantage declines, the United States will be less confident that a war with China will conform to its plans,” reads the new report by David C. Gompert, Astrid Cevallos and Cristina L. Garafola. “China’s improved military capabilities, particularly for anti-access and area denial (A2AD), mean that the United States cannot count on gaining operational control, destroying China’s defenses, and achieving decisive victory if a war occurred.”

A war with China—now and in the future—would likely be fought at sea and in the air, but cyber and space capabilities would play a significant role, according to the report. But the RAND researchers expect that should a war breakout, it would remain a conventional fight. “Each side’s increasingly far-flung disposition of forces and growing ability to track and attack opposing forces could turn much of the Western Pacific into a ‘war zone,’ with grave economic consequences,” reads the report. “It is unlikely that nuclear weapons would be used: Even in an intensely violent conventional conflict, neither side would regard its losses as so serious, its prospects so dire, or the stakes so vital that it would run the risk of devastating nuclear retaliation by using nuclear weapons first.”

Moreover, while the RAND study postulates that the United States would strike heavily at the Chinese mainland, the researchers don’t believe that Beijing would strike at the U.S. homeland except via cyber attacks. “We also assume that China would not attack the U.S. homeland, except via cyberspace, given its minimal capability to do so with conventional weapons,” the report states. “In contrast, U.S. nonnuclear attacks against military targets in China could be extensive.”

A Sino-American war could develop in a number of ways—including short bloody war or a long and devastating war. Moreover, modern technologies incentivize either side to launch a preemptive attack first. “Sensors, weapon guidance, digital networking, and other information technologies used to target opposing forces have advanced to the point where both U.S. and Chinese military forces seriously threaten each other,” the report reads. “This creates the means as well as the incentive to strike enemy forces before they strike one’s own. In turn, this creates a bias toward sharp, reciprocal strikes from the outset of a war, yet with neither side able to gain control and both having ample capacity to keep fighting, even as military losses and economic costs mount.”

In the case of a brief war fought today, American losses would be significant, but Chinese losses might be catastrophic. “If either U.S. or Chinese political leaders authorize their military commanders to carry out plans for sharp strikes on enemy forces, a severely violent war would erupt,” the report reads. “As of 2015, U.S. losses of surface naval and air forces, including disabled aircraft carriers and regional air bases, could be significant, but Chinese losses, including to homeland-based A2AD systems, would be much greater. Within days, it would be apparent to both sides that the early gap in losses favoring the United States would widen if fighting continued.”

By 2025, however, China’s military capabilities are likely to have expanded to a point where it will not sustain as many losses. “By 2025, though, U.S. losses would increase because of enhanced Chinese A2AD. This, in turn, could limit Chinese losses, though these would still be greater than U.S. ones,” the report reads. “It could be unclear then whether continued fighting would result in victory for either side.”

A longer war would be far more devastating—and could leave both military forces in shambles. “As of 2015, the longer a severe war dragged on, the worse the results and prospects would be for China,” the report states. “By 2025, however, inconclusive results in early fighting could motivate both sides to fight on despite heavy losses incurred and still expected. Although prospects for U.S. military victory then would be worse than they are today, this would not necessarily imply Chinese victory.”

In any of the cases above—a war would cause serious losses and enormous economic damage. Indeed, it might deplete the military capabilities of both sides at an unprecedented rate—leaving both vulnerable to other threats. “The unprecedented ability of U.S. and Chinese forces to target and destroy each other—conventional counterforce—could greatly deplete military capabilities in a matter of months,” the report reads. “After that, the sides could replenish and improve their forces in an industrial-technological-demographic mobilization contest, the outcome of which depends on too many factors to speculate, except to say that costs would continue to climb.”

The RAND study also makes a few recommendations to mitigate the potential for war.

- U.S. and Chinese political leaders alike should have military options other than immediate strikes to destroy opposing forces.

- U.S. leaders should have the means to confer with Chinese leaders and contain a conflict before it gets out of hand.

- The United States should guard against automaticity in implementing immediate attacks on Chinese A2AD and have plans and means to prevent hostilities from becoming severe. Establishing "fail safe" arrangements will guarantee definitive, informed political approval for military operations.

- The United States should reduce the effect of Chinese A2AD by investing in more-survivable force platforms (e.g., submarines) and in counter-A2AD (e.g., theater missiles).

-The United States should ensure that the Chinese are specifically aware of the potential for catastrophic results even if a war is not lost militarily.

- The United States should improve its ability to sustain intense military operations.

-U.S. leaders should develop options to deny China access to war-critical commodities and technologies in the event of war.

-The United States should undertake measures to mitigate the interruption of critical products from China.

-Additionally, the U.S. Army should invest in land-based A2AD capabilities, encourage and enable East Asian partners to mount strong defense, improve interoperability with partners (especially Japan), and contribute to the expansion and deepening of Sino-U.S. military-to-military understanding and cooperation to reduce dangers of misperception and miscalculation.

Ultimately, war is not in the interests of either the United States or the People’s Republic of China. Unfortunately, increases in ones’ own defensive capabilities often causes insecurity in another—part of the so-called Thucydides Trap. But as renowned Harvard scholar Graham Allison wrote—the Thucydides Trap is not unavoidable. “A risk associated with Thucydides’ Trap is that business as usual—not just an unexpected, extraordinary event—can trigger large-scale conflict. When a rising power is threatening to displace a ruling power, standard crises that would otherwise be contained, like the assassination of an archduke in 1914, can initiate a cascade of reactions that, in turn, produce outcomes none of the parties would otherwise have chosen,” Allison wrote for the Atlantic. “War, however, is not inevitable.”