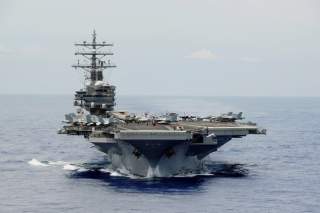 The so-called 'Taiwan Scenario', in which the U.S. and China would come to blows over the democratic island-state that China still views as sovereign territory, is making a bit of a comeback among analysts. This is mostly due to Taiwan's national elections in January next year, where it looks highly likely that the pro-independence Democratic Progressive Party will win the office of president.

In dueling op-eds last week in The Age, Hugh White and Michael J Cole clashed over the strategic consequences for China and the U.S. (and Australia) of such a result. One aspect of the argument rests on whether the U.S. would be willing to eventually risk nuclear war with China over Taiwan. As Hugh says:

“For most Americans, their commitment to defend Taiwan is close to sacrosanct, especially as Taiwan is now a vibrant democracy whose people clearly do not want to live under Beijing. And failing to stand up to China over Taiwan would do huge damage to US strategic leadership in Asia and beyond, while immensely strengthening China's regional sway . . . But the harsh reality is that supporting Taiwan against Chinese pressure over coming years might cost the U.S. more than it is willing or able to pay. U.S. leaders might have to ask themselves whether they are willing to risk a nuclear attack on the continental US in order to defend Taiwan from China. If the answer is no, then Taiwan's status quo might become harder and harder to sustain.”

Cole makes the point that China is more likely to use economic coercion before relying on the use of force. And even if economic coercion didn't work, China knows that on the nuclear front, it is inferior to the U.S.:

“The belief that there is a 'real risk' that China would fire nuclear weapons at the US over Taiwan is predicated on the view that decision makers in Beijing are nihilists or irrational. China knows it could never survive nuclear war with the US, and important though Taiwan might be, it is unlikely that Beijing would be willing to sacrifice everything it has accomplished since 1949 for the sake of an island of 23 million people. For all its ills, the CCP is not bent on self-destruction; in fact, its primary objective is self-preservation.”

However, a recent RAND study, which White refers to in his piece, supports the assertion that things have changed since the last Taiwan Strait crisis in 1996. The military balance has shifted in favor of China, particularly if a conflict is short. As the report states, this may shift decision-making in Beijing:

“Over the next five to 15 years, if U.S. and PLA forces remain on roughly current trajectories, Asia will witness a progressively receding frontier of U.S. dominance. The United States would probably still prevail in a protracted war centered in virtually any area, and Beijing should not infer from the above generalization that it stands to gain from conflict. U.S. and Chinese forces would likely face losses on a scale that neither has suffered in recent decades. But PLA forces will become more capable of establishing temporary local air and naval superiority at the outset of a conflict. In certain regional contingencies, this temporal or local superiority might enable the PLA to achieve limited objectives without 'defeating' U.S. forces. Perhaps even more worrisome from a military-political perspective, the ability to contest dominance might lead Chinese leaders to believe that they could deter U.S. intervention in a conflict between it and one or more of its neighbors. This, in turn, would undermine U.S. deterrence and could, in a crisis, tip the balance of debate in Beijing as to the advisability of using force.”

The report also records the advances the PLA has made since 1996, most of which are impressive:

“As late as 2003, only about 14 percent of its destroyers and 24 percent of its frigates might have been considered modern—capable of defensive and offensive operations against a capable enemy. By 2015, those figures had risen to 65 percent and 69 percent, respectively.'

“Between 1996 and 2015, the number of modern diesel submarines in China's inventory rose from two to 37, and all but four of theses boats are armed with cruise missiles (as well as torpedoes). RAND modeling suggests that the effectiveness of the Chinese submarine fleet (as measured by the number of attack opportunities it might achieve against carriers) rose by roughly an order of magnitude between 1996 and 2010, and that it will continue to improve through 2017.”

Whatever the outcome of Taiwan's elections, it's clear that the PLA's technological and material advances are significant, and are set to grow.