New Study Says Shoulder-Fired Weapons Are Hazardous for the Brain 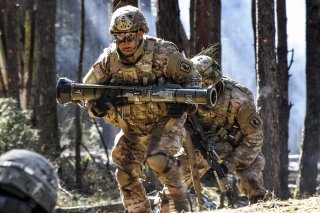 Service members risk brain damage when operating shoulder-fired heavy weapons like the AT4, LAW, and Carl Gustaf recoilless rifle, according to a new report by the Center for a New American Security.

- Whether those symptoms can become permanent is unclear. However, DoD studies have also “found higher rates of confusion and post-concussion associated symptoms among individuals with a history of prolonged exposure to low-level blasts,” according to CNAS.

- “When you fire [heavy weapons], the pressure wave feels like getting hit in the face,” Paul Scharre, a co-author of the report, told National Public Radio on Monday.

- Additionally, the report recommends that the Army better “protect soldiers against blast-induced brain injury” by increasing the use of sub-caliber rounds in training and enforcing limits of firing heavy weapons.

- To better assess how “blast pressure exposure” impacts the brain, the report urges the Army to expand the use of small devices that measure the intensity of blast waves. So-called “blast gauges” can be attached to the helmet or shoulder.

- “Every service member who is in a position where he or she might be exposed to blast waves should be wearing these devices,” Sharre told NPR. “And we need to be recording that data, putting it in their record and then putting it in a database for medical studies.”

- CNAS also recommends that “blast exposure history”  be included in soldiers’ service records so medical issues that later arise as a result of operating heavy weapons can be treated as service-connected injuries.

Have you ever suffered a concussion after firing a shoulder-fired weapon? Give us your take via email.