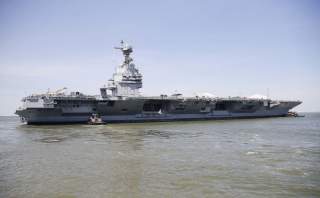 Next year, the Navy plans to use electromagnetic force to launch an F/A-18 Super Hornet fighter jet up into the sky off of the deck of its emerging next-generation aircraft carrier next year – the USS Gerald R. Ford.

An operational launch of the Navy’s Electro-Magnetic Aircraft Launch System, or EMALS, will mark the first time in 60-years that a fighter has shot off of a ship without using the current steam-catapult systems, senior Navy officials have said.

The first EMALS system has been under construction for several years aboard the USS Gerald R. Ford, or CVN 78, the first in class of the new carriers.

Ship integration and testing for the EMALS technology will mark a substantial milestone in a program which, until now, has largely been conducting deadload launches off of a ship and land-based flight tests at the Navy facility in Lakehurst, NJ.

Plans for the F/A-18 aboard the Ford come as Navy engineers complete testing and integration of the new electro-magnetic catapult aboard the Ford, Ensign Marc Rockwellpate told Scout Warrior in a statement.

“As part of this test phase, a total of 242 deadload launches were conducted. The EMALS system is now undergoing planned maintenance both aboard ship and at the land-based test site, in Lakehurst, New Jersey, in preparation for CVN 78 delivery.  The first launches with FA-18E/F aircraft from CVN 78 are scheduled in FY17,” he said.

The EMALS system consists of a series of transformers and rectifiers designed to convert and store electrical power through a series of motor generators before brining power to the launch motors on the catapults, Navy officials have explained.

Unlike steam catapults, which use pressurized steam, a launch valve and a piston to catapult aircraft, EMALS uses a precisely determined amount of electrical energy. As a result, EMALS is designed to more smoothly launch aircraft while reducing stress and wear and tear on the airframes themselves.

On the ship, EMALS will be engineered such that any of the ship’s four catapults will be able to draw power from any one of three energy storage groups on the ship, officials said.

As the catapult troughs for the USS Ford’s EMALS system were being built and integrated with the overall system, the system’s technology has been in the process of extensive testing at a Naval Air Warfare Center facility in Lakehurst, N.J.

The USS Ford has been under construction in recent years at Newport News Shipbuilding, a division of Huntington Ingalls.  Equipment for the EMALS system has been in development on board the ship for several years, Navy officials said.

Some of the equipment, such as the motor-generators, are lower in the ship so they had to be part of the super-lift early on, service officials explained.

Metal decking is placed over the trough on the flight deck. Cabling and linear induction motor sections have been installed on board the USS Ford.

Navy officials said It is the same type of technology used in a rollercoaster designed for critical launch reliability.  An electromagnetic field turns on linear motor sequentially so as not to energize the whole field in one shot, Navy experts added.

Aircraft motors are kicked in and then a hydraulic piston pushes a shuttle forward. The shuttle is what connects to the aircraft launch bar, developers explained.

The EMALS system can adjust to different aircraft weights and configurations. For example, EMALS is configured such that it could launch a lighter weight aircraft, such as an unmanned aircraft system.

This is particularly useful because the amount of thrust needed to launch an aircraft depends upon a range of interwoven factors to include size, shape and weight of the aircraft, wind speed on the carrier deck and the speed of the aircraft carrier in the water, Navy program managers said.

EMALs is engineered to support current and future air-wing configurations; it is designed to accommodate a future air wing that requires higher energy launches.

The USS Ford is able to generate 13,800 volts of electrical power, more than three times the 4,160 volts that a Nimitz-class carrier generates, Navy engineers have explained.

The EMALS system is also engineered to work in tandem with the USS Ford’s new Advanced Arresting Gear, or AAG. Unlike the existing hydraulic system used on current aircraft carriers, AAG is a mechanical electrical system with a cable that spins a water twister.

Similar to EMALS, the AAG is also designed to reduce stress on the airframe during the landing process.