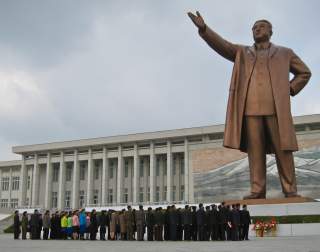 New president, same tough talk on North Korea. Although US President Trump claims to be upending the way business is done in Washington, he still has the same limited set of policy options for dealing with North Korea. For over half a century, those options have been a narrow band of economic sanctions, rhetorical name-calling, and threats that the United States and South Korea will retaliate if attacked. Deterrence holds on the peninsula, but it holds both ways: it stops North Korea from attacking the South, but it also stops the United States and South Korea from attacking the North.

Pressure has not worked on North Korea in the past, and there is no evidence that more pressure will work today. China could pull the economic plug on North Korea and send the country into a tail-spin, but it won’t. The United States could start a war on the peninsula through pre-emptive strikes and devastate the regime, but it won’t. Neither China nor the United States will take such strong measures because the costs are far too high and far too obvious, while the unknowns of what would happen after remain too unknown.

Pyongyang can take out Seoul with its conventional weapons, and could even target Tokyo. Starting a war would put millions of lives at stake, and making the regime collapse would mean that potentially millions of refugees flood into Northeast Asia. Nuclear weapons and other weapons of mass destruction would potentially fall into the hands of whoever got hold of them in the ensuing chaos. Given that stark reality, the status quo — deterrence, tough talk, sanctions and perhaps a little engagement — has remained the North Korea policy of choice for successive US governments.

The international community has tried many ways to exert pressure on North Korea over the past 70 years. Given the extensive sanctions already imposed on the country, it’s hard to believe that even more pressure will somehow lead the country to choose a new direction. The regime has a history of successfully enduring pressure, weathering the economic dysfunction of the mid-1990s and surviving a merciless famine. Predictions that the new sanctions will elicit change in Pyongyang’s policies, if not cause a full collapse, rest on thin logic.

Even if China does decide to squeeze the North Korean economy, the real question is whether the regime will back down, or whether it will lash out in other ways. North Korea is extremely consistent: it meets pressure with pressure of its own. Given that it has been virtually isolated for decades, it is not at all clear why isolating it a tiny bit more will do the trick.

Any solution to the North Korean problem that involves its capitulation is unrealistic. The United States doesn’t like North Korea, nor does it like North Korea’s leaders or their policies. But it must deal with North Korea as a country like any other. North Korea is not simply going to disappear, and there is decades of evidence that it will not capitulate to pressure.

The nuclear and security situation looks almost identical to 20 years ago — two sides deterring each other through the use of threats, sanctions and pressure. But what has changed about North Korea is its economy. Looking back on the transformation the country has undergone over the past couple of decades, the economic and business landscape is unrecognisable compared to what it was in 1995.

North Korea’s economy is significantly more penetrated than it was 20 years ago. There is substantially more trade taking place — the best open sources estimate that 40 per cent of North Korean incomes, if not half, now derive from the market economy. People’s livelihoods are less tied to their government today than ever before. These changes have been so transformative that the regime has attempted to roll back market forces and rein in the people out of fear of losing its power. Pyongyang is worried that the more people operate in the market, the less control the government will have.

This is all the more reason for an engagement policy that promotes these changes in North Korea. Such a policy would help North Korean people avoid suffering and starvation, while moving the country in the right direction. There is no clear solution to the nuclear and security problem with North Korea. But slowly changing the way North Korean people think about their own government and the outside world could be a major element in promoting change.

David C. Kang is Professor of International Relations and Business at the University of Southern California. His latest book, Arms Races, Costly Signals, and American Grand Strategy to Asia in the 21st Century, will be published by Cambridge University Press later this year. You can follow him on Twitter at @daveckang.