Next Up for Syria: Even More Lethal Russian Military Hardware 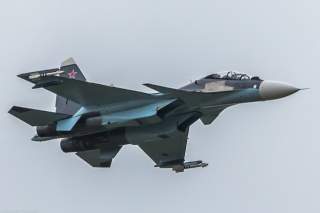 Russia is continuing to up the ante in Syria following the downing of one of its Sukhoi Su-24 Fencer bombers by Turkey.

Moscow is considering deploying about a dozen more Sukhoi Su-30SM and modernized Su-27SM3 Flanker air superiority fighters to its base in Latakia to provide fighter escort for its strike aircraft, according to the Russian newspaper Kommersant. That’s in addition to the powerful S-400 air and missile defense system and the missile cruiser Moskva that Russia deployed to the region last week. The Russians have also imposed a number of economic sanctions against Turkey as a result of the incident.

The new deployment is not unexpected since the Russians have stated that fighter aircraft will escort all future strike missions in Syria. “All the activities of the attack aviation will be carried out only under cover of fighter aircraft,” said Lt. Gen. Sergei Rudskoy, a senior member of Russia’s general staff, on Nov. 25. Russia does not have enough jets in the theatre to make good on that statement—thus it was a foregone conclusion that it would have to deploy additional fighters.

Meanwhile, the Russians have started to arm of all of their air-to-air capable aircraft with air intercept weapons. “Today, for the first time Russian Su-34 fighter-bomber aircraft went on a mission carrying not only aerial bombs OFAB-500 and guided aerial bombs KAB-500, but with short and medium range air-to-air missiles,” Russian air force spokesman Col. Igor Klimov told the Russian state-owned media outlet Sputnik. The missiles “are equipped with homing devices and are capable of hitting aerial targets at a distance of 60 kilometers.”

Based on Klimov’s description, the Su-34s are likely carrying a variant of the very capable Vympel R-73 high off-boresight dogfighting missile and semi-active radar homing Vympel R-27R1 or R-27ER1 missiles.

Russian fighters in Syria—including the advanced Su-30SM—have been observed carrying the relatively old R-27 instead of the much more capable active radar homing R-77 for reasons that are not entirely clear. It is possible that the Russian air force chose to buy advanced aircraft while neglecting to purchase adequate stocks of suitable weapons to equip those jets—which is a common practice amongst the world’s air forces.

While the Russia’s deployment of advanced air-to-air fighters and air defenses will help to protect its strike aircraft, the Russian military is hoping to gain real world operational experience with its new weapons too. According to Kommersant’s source on the Russian general staff, Moscow had originally planned to deploy the older S-300PS or PMU, but Su-24 incident opened up the opportunity to deploy the S-400 and to “test it in the real world conditions.”

Similarly, this is the first time the heavily upgraded Su-27SM3 has been deployed operationally. Unlike other advanced Su-27 Flanker variants, this version of the jet is an upgrade of the original aircraft that were already in service with the Soviet and Russian air forces. While some of the aircraft are new build machines originally intended for export to China, the majority of Russia’s Su-27SMs are old Soviet-era airframes modernized to current standards.

The Su-27SM—which draws on the Su-35S for technology—incorporates a reinforced airframe, an upgraded glass cockpit, new electronic warfare systems and a host of new weapons. The upgraded jet also boasts a host of upgraded datalinks and a new radar—but the exact type is not clear. While some sources suggest that the aircraft incorporated the Su-35’s Irbis-E passive electronically scanned array radar, it’s not clear that the original Su-27 can handle the weight or power requirements. It is more likely that the jet is equipped with an electronically scanned version of the N001VEP radar. The Su-27SM3 also incorporates AL-31F-M1 engines, which offsets some of the weight gains.

It’s not clear when the dozen or so additional Russian fighters will arrive in Syria. Meanwhile, another Russian warplane entered into Israel’s airspace in recent days, but that incident was resolved peacefully without provoking any major diplomatic fireworks. The Russian jet apparently penetrated Israeli airspace by about one mile, but was “immediately corrected in the communications channel.”

“Russian planes don’t intend to attack us and therefore there is no need to automatically, even if there is some kind of mistake, shoot them down,” said Israeli defense minister Moshe Ya’alon according to the Guardian.

Moshe also said that the Russians give Israel prior notice before flying near its airspace. “Just as we don’t interfere with their operations and we don’t get involved, as a policy, in what is happening in Syria, they also don’t interfere with us flying and acting in accordance with our interests,” Moshe said.