No Deal: Why North Korea Won't Be the Next Iran 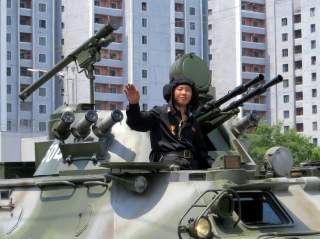 As the sounds of artillery faded across the North-South Korean border recently, hopes were truly dashed for a new diplomatic breakthrough between the United States and North Korea.  Hopes had been raised in Washington, in Beijing and even in Seoul, for a revival of the Six Party Talks in the wake of the successful U.S.-Iran Nuclear Deal. These hopes were especially cogent in the run up of visits to Seoul, Tokyo and Beijing by the American special envoy to these talks, Sydney Seiler, in late July. However, the recent announcement of Vice-Premier Choe Yong-gon’s execution in North Korea dampened such hopes. For North Korea-watchers, the recent spate of purges of elites by Kim Jong-un suggests that the regime is going through a consolidation of power, and it is unlikely to accept or even to deal with diplomatic overtures from the United States or its allies for some time. In many ways, the reason for this latest cross-border flare-up has its origins in North Korea’s domestic politics.

Events in North Korea this summer have revealed a country undergoing continued instability as leader Kim Jong-un carries out purge after purge of the top brass. Vice Premier Choe Yong-gon was apparently executed in May, but news of his execution only surfaced on August 12. The news follows earlier purges of Armed Forces Vice-Minister So Hong-chan, Defense Minister Hyon Yong-chol and Director of the Designing Department of the National Defense Commission Ma Won-chun. While purges in North Korea are nothing new, North Korea analyst Aidan Foster-Carter points out that top-level bureaucrats and military elites usually just disappear. It would appear that these arrests and executions have been staged for internal consumption. As with all things domestic, these purges are a form of internal signaling from the regime to the elites.

While all of this seems of peripheral interest to U.S. policy makers, the question of the stability and staying power of the regime is important both for planned diplomacy and for anticipating future provocations. Though feeling the economic pressure of sanctions, an internally robust Pyongyang might be coaxed back to the diplomatic table. Presumably, a regime at peace with itself would be able to agree internally what its negotiating terms are, in line with some sort of national strategy. An internally weak or divided regime, on the other hand, will eschew any form of compromise with the regime’s perceived enemies, as any compromise might be construed as weakness or treason, and used internally by one faction against another. In North Korea, roughly speaking, there are three main factions: the Kim family (and its supporters), the Korean People’s Army and the Korean Worker’s Party. As with pre-Revolutionary France, these three factions subtly vie with each other for the power and resources of the state: their roles might be said to equate to France’s monarchy, aristocracy and clergy. Historically, the relationship has been marked by cycles of competing and cycles of converging interests.

While verification of events inside the hermetic kingdom is famously difficult, it is possible that these purges have arisen from a competition taking place between the three factions initiated by the young leader. To put this competition in perspective, one must look back to the evolution of this power triangle between 1996 and 2010. If one looks back to Kim’s father, Kim Jong-il, one can see that only two years after taking power he implemented a new constitution (called the 1998 Constitution). This consolidated his position within the military’s National Defence Commission and simultaneously elevated the military above the party in a policy that came to be know as Songun or “military first”. In essence, Songun was both a counterrevolutionary strategy and a strategy for governing, complementing the official state ideology of Juche and the cult of leadership built around the Kim family (Kimilsungism-Kimjongilism). While there is no clear evidence that Kim Jong-un has officially reversed that and elevated the party above the Korean People’s Army, his pursuit of economic growth may have been at the expense of the army’s interests, leading him to co-opt the party.

Finally, there is the possibility that Kim Jong-un’s age is a factor in driving this new iteration of inter-elite competition; the neo-Confucian society of Korea traditionally elevates age above youth and is heavily reliant on social networks to enable influence and power. Elevated well above his peer group, Kim Jong-un may have found it difficult to compete with the clannish military leaders, with their decades of friendship and loyalty to the military. Carrying out initial purges may have allowed him both to signal the continued strength of the Kim family and to undertake some practical internal reordering. Purges open up seats and give Kim the power to fill them, allowing him to displace the old with the new. In essence, purges strengthen Kim’s coercive power, his interpersonal power and his patronage power all at once. His promotion of a trusted family member, sister Kim Yo-jong, to vice-director of the KWP’s Propaganda and Agitation Department also suggests that Kim Jung-un will continue to burnish the family’s cult of personality. While Songun and Juche are shared out among the military and party respectively, the sacred place of the Kim family in Kimilsungism-Kimjongilism makes it uniquely unassailable with respect to the other two factions. As with the concepts of divine monarch and heavenly mandate, the cult of leadership built around Kim Jong-un will liken treason to heresy.

In terms of deciding future U.S. policy, it is clear that North Korea is not ready to come back to the table. Internally, it is undergoing too much upheaval. Nor is it clear that coming to the table would be much use, given its policy of maintaining its nuclear-power-state status. The United States and its allies face a choice: they can sit back and allow the Kim regime to consolidate power between the military and the party, hoping to be rewarded for their forbearance, or they can make minute shifts in policy that have ever-larger effect. Realistically a policy of forbearance is unlikely to be recognized much less rewarded by Pyongyang. One can see this from how the regime simply pocketed previous diplomatic gains—such as under the Sunshine policy. Rather than waiting to buy the same horse again, the United States should seek to modify the policy of strategic patience with a growing information campaign inside the regime. This should be enough to keep the regime off balance, rather than seek to bring it down, though the long-term effects of this should be anticipated. The watchword should be subtlety; revealing the truth is likely to be far more successful than propaganda loudspeakers on the border. It is surprising how lenient the United States and its allies have been in this regard, given the success of such campaigns vis-a-vis the Eastern Bloc during the late stages of the Cold War. This should be replicated. Information control is the Achilles heel of all totalitarian regimes: revealing the true state of the outside world and the perks of the regime’s ruling class would suffice, through the use of DVDs, USB drives, and increased radio traffic. Not to do so, is to allow a nuclear-proliferator regime to continue its existence through the lifespan of another Kim, allowing the regime to blackmail China and others for aid and sustenance for another sixty years or so. Worse still, it is to support the current plight of the long-suffering North Korean population.