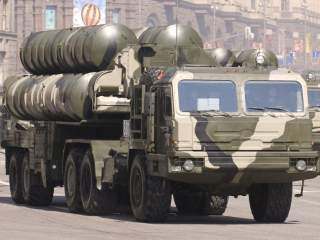 India is set to buy five Almaz-Antey S-400 Triumf air and missile defense systems from Russia, it was reported this week. New Delhi is the second foreign customer for the powerful missile system after Beijing, which is also buying six S-400 batteries.

According to the Times of India, even though the word of the sale comes just before a Christmas Eve summit between Russian president Vladimir Putin and Indian prime minister Narendra Modi, an actual contract will take time to negotiate. It is therefore unlikely that the two leaders will formally announce a deal in Moscow. “It will take a few years for the S-400 systems to be actually inducted. The plan is to deploy three in the west and two in the east to seriously bolster the nation's air defence capability,” a source told the Indian daily.

Should the Russians and Indians reach a final agreement, the S-400 sale could be worth as much as $6 billion. But while the Indians are eager to acquire the S-400, Moscow has not yet confirmed if it will sell the weapon to New Delhi.

The proliferation of weapons like the S-400 and its S-300 predecessor pose a serious challenge of U.S. and allied air power. Both weapons systems are highly mobile, thoroughly networked and can protect vast areas. Effectively, weapons like the S-400 and S-300 make an entire region inaccessible to conventional non-stealthy combat aircraft. It’s a problem that is only going to get worse over time as countries like Iran acquire such system. In fact, Tehran has already started to receive a version of the S-300.

According to manufacturer Almaz-Antey, the S-400 “baseline” system can engage targets at ranges of more than 155 miles at altitudes up to 90,000ft. Also of note,  the S-400 can support at least three types of missiles with differing capabilities. According to Western sources, some versions of those missiles are capable of engaging targets as far way as 250 miles. The S-400 can track 300 targets simultaneously and engage thirty-six of those at any one time.

Meanwhile, the S-300PMU-2 Favorit has a range of more than 120 miles and can hit targets as high as 100,000ft. The system can engage half-a-dozen or more targets simultaneously. Either version of the weapon is extremely capable and could render entire swaths of territory nearly invulnerable to attack via conventional strike aircraft. As one senior U.S. Marine Corps aviator told me earlier in the year, the S-300 series is a deadly threat to everything except the most advanced stealth fighters and bombers. “A complete game changer for all fourth-gen aircraft [like the F-15, F-16 and F/A-18]. That thing is a beast and you don’t want to get near it,” he said.

Only the Lockheed Martin F-22 Raptor, F-35 and Northrop Grumman B-2 Spirit stealth bomber would be able to operate inside areas protected by those weapons. But even those aircraft could be challenged if there were enough S-300 or S-400 batteries operating as part of an integrated air defense network.

The exact number and location of the S-300s and S-400s would make a huge difference. The problem is further compounded by the fact that both systems are mobile—and can move at a moment’s notice. “If they’re all over every square inch of the country, then it doesn’t matter what you put out there—it’s going to be a challenge,” a senior Air Force official with extensive stealth experience told me earlier in the year.

For the United States, the solution is to move forward with next-generation systems like the F-35, the Next Generation Jammer, Long Range Strike-Bomber and potentially a stealthy new naval unmanned combat aircraft. New next-generation cruise missiles are also going to be needed to penetrate an ever more dense threat environment. Further, both the U.S. Navy and the U.S. Air Force might consider pressing forward with sixth-generation platforms and new armaments.