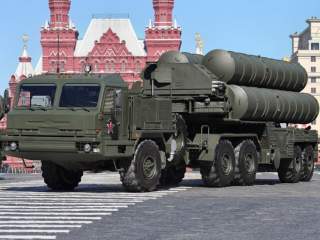 Russia is gearing up to test the first prototypes of its next-generation Almaz Antey S-500 air and missile defense system.

Deliveries of the prototypes of the new weapon are scheduled for later this year, according to Russian state-run media outlet Sputnik International, which did not cite a source. Following the delivery of the prototypes, the S-500 will begin a series of “pre-tests” before the end of 2016.

The S-500 Prometey—also known as the 55R6M Triumfator-M—is expected to be much more capable than the current S-400 Triumf, which is currently deployed in Syria and across many Russian military districts—including Kaliningrad on the Polish border.

When the S-500 Prometey becomes operational in 2017, it will likely form the upper tier of Russia’s layered integrated air defense system.

The S-500 is expected to able to detect and simultaneously attack up to ten ballistic missile warheads flying at speeds of twenty-three thousand feet per second. It is also reportedly being designed to use hit-to-kill interceptors—a design with similarities to Lockheed Martin's Terminal High Altitude Area Defense (THAAD). The system may have a range as great as 373 miles and hit targets as high as 115 miles, which means the S-500 will be able to intercept warheads incoming from space.

The Russians are expected to network the S-500s with their S-400 and S-300 predecessors as part of an overall integrated air-defense network. As one U.S. industry official noted, while the Russian military industrial sector suffered greatly in the aftermath of the collapse of the Soviet Union, somehow Moscow managed to continue developing advanced air defense system without much degradation in capability. Indeed, some of these new weapons—like the S-500—are so capable that many U.S. defense official worry that even stealth warplanes like the F-22, F-35 and the B-2 might have problems overcoming them.