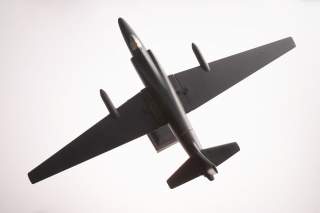 The Air Force gradually assumed control of most CIA U-2 units after the Anderson shoot-down, redesignating them Strategic Reconnaissance Squadrons. Over the following decade, they were dispatched to bases in Thailand, Japan, the Philippines and even India, photographing North Vietnamese defensive installations, North Korean and Indonesian troop movements, and Chinese border fortifications. They would also range over the Middle East, keeping an eye on developments in the Arab-Israeli conflict.

Over 104 U-2s were produced in total, the last rolling off the production lines in 1989. The current U-2s are all descended from the U-2R airframe, introduced in 1967, with a 30 percent enlarged fuselage, wings extended to a hundred-foot span and increased fuel capacity.

In 1981, a new variant of the U-2R with special reconnaissance pods under the wings and a Side-Looking Airborne Radar for scanning the ground was rebranded the TR-1A, for “Tactical Reconnaissance.”

The U-2 and TR-1 were no longer performing deep missions over defended airspace—that was a job satellites could do without risk to human life. But the U-2 could still fly safely over areas where there was no threat from high-altitude missiles and modern interceptors, providing higher-quality imagery more flexibly than satellites could.

In the last few years, U-2s of the Ninth Reconnaissance Wing have been flying missions lasting up to twelve hours over Iraq and Afghanistan, providing detailed photographic intelligence of ISIS and Taliban positions.

The Air Force had planned to retire the U-2 in 2014 in favor of the RQ-4 Global Hawk drone. But the U-2 can mount heavier, higher quality sensors than the RQ-4, and is actually less than half the cost to operate per flight hour. Furthermore, an Air Force general noted it could take nearly a decade for the RQ-4s to be ready to provide the same amount of coverage as what the U-2s already offer.

Ultimately, the high-demand placed on aerial recon assets in the conflict with ISIS has resulted in U-2 operations being funded at least until 2019.

Lockheed has proposed to create a special TR-X spy plane derived from the U-2 that can be remotely piloted as a drone over riskier areas. The Pentagon is weighing whether or not to invest up to $4 billion to field thirty to forty of the unstealthy but long-enduring spy drones.

For now, however, the old U-2s will continue to do their job. Though the airframe may be old, the U-2’s sensors are not, allowing the Dragon Lady to provide Washington keep a detailed eye on what’s happening on the ground from high up in the sky.