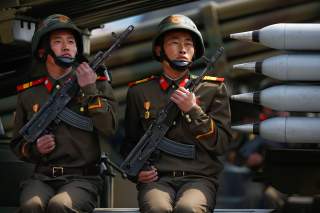 The American crew was eventually moved to a better facility, where they were inundated with propaganda videos. The sailors attempted to clandestinely resist by formulating oddly worded confessions and flipping their middle fingers when posing for photos, which they explained was a “Hawaiian Good Luck” sign to their interrogators. Unfortunately, a Time magazine article eventually gave this ploy away to their captors, who subjected the prisoners to a week of brutal torture as a punishment.