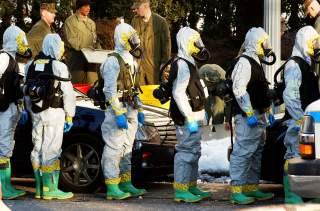 North Korea might be trying to equip its new intercontinental ballistic missile arsenal with biological weapons—specifically anthrax—according to a new report.

The report from the Japanese newspaper Asahi Shimbun cites a South Korean intelligence source that suggested that Pyongyang has tested loading anthrax onto its ICBMs. According to Asahi’s source, Pyongyang is “conducting heat and pressure resistance tests” to see if the anthrax bacteria can survive the 7,000 degrees Celsius or higher temperatures that an reentry vehicle would encounter upon reentering the Earth’s atmosphere. According to the Asahi report, North Korea has already conducted a successful experiment with such weapons.

According to Asahi’s source, the North Koreans are developing the biological weapons payload because they are not yet fully confident that they can deliver a nuclear warhead anywhere inside the United States just yet. However, most of the arms control community seems to believe that Pyongyang already has such a capability—or at the very least—will have such a capability in the very near future.

Arms control experts are skeptical about the Asahi report, noting that it would be very difficult to engineer a way to keep the anthrax bacteria alive during reentry.

“I have a very hard time believing anthrax could survive ICBM reentry in any form,” missile expert Vipin Narang, an associate professor of political science at the Massachusetts Institute of Technology, told The National Interest. “That report seems very suspicious. And grasping at straws the way they quote the NSS [Trump’s National Security Strategy].”

Joshua H. Pollack, editor of the Nonproliferation Review and a senior research associate at the James Martin Center for Nonproliferation Studies, told the National Interest that using a biological weapon in conjunction with an ICBM makes little sense. “I view it with skepticism,” Pollack said. “There were similar claims about the USSR at one time that just seem to have been made up. Why would anyone put a bacterial weapon like anthrax on an ICBM, anyway? It seems like a really poor way to disseminate it. What you'd want is a sprayer. Hard to deliver those by missile.”

The mostly likely scenario here is that this is a rumor run amok. “It's a rumor, and like any rumor it could be a) true—very unlikely in this case, I would judge,” Pollack said. “B—false, or C—garbled, perhaps containing a nugget. While I think the North Koreans believe we have biological weapons and would like the ability to deter us by responding in kind to any sort of attack, it's just not a very practical category of weapon for intercontinental delivery.”

Given the high level of tension between the United States and North Korea, such reports and rumors are bound to emerge. However, until there is more solid information, Washington should take care not to overreact.