North Korea Can Barely Contain Its Fury Over What This U.S. Senator Said 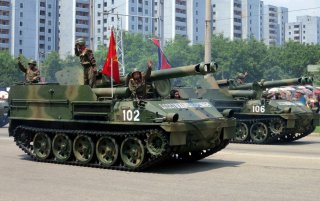 North Korea has flipped out over the comments of another U.S. politician quick to criticize Kim Jong Un.

“Some [expletive] by the name of Cory Gardner, who sits on the U.S. Senate Foreign Relations Committee, perpetrated wicked blasphemy against our supreme dignity during an interview with NBC,” KCNA wrote, according to a translation by UPI’s Elizabeth Shim. “For a psychopath like the [expletive] Gardner, to hurl evil accusations at our highest dignity, is a serious provocation.”

“I think most people agree that Kim Jong Un is a whack job,” Gardner said earlier this week on MSNBC’s “Morning Joe.”

“This is a crazed maniac at the helm of one of the world’s nuclear regimes, trying to become a nuclear regime,” Gardner added.  “We shouldn’t be in the position of flattery.”

Gardner has been a strong advocate for tougher sanctions on North Korea. President Donald Trump recently called Kim Jong Un a “smart cookie” and said that he “would be honored” to meet him. “We shouldn’t be in the position of trying to honor Kim Jong Un by bringing him into a conversation with the United States until” he fulfills his obligations, Gardner told MSNBC.

KCNA warned that the U.S. will face “misfortune” for the comments of its elected officials.

Friday’s KCNA article is not the first time North Korea has freaked out over the comments of a U.S. politician in recent months. North Korea slammed Arizona Sen. John McCain at the end of March for calling Kim Jong Un a “crazy fat kid.”

“The revolutionary forces of the DPRK with its nuclear force for as its pivot will fulfill its sacred mission of devotedly defending its supreme leadership representing the destiny and life of its people by dealing a merciless sledge-hammer blow at those daring [to] hurt the dignity of the supreme leadership,” the North said in response.

North Korea also attacked the Wall Street Journal for an op-ed on the need for regime change, threatening that the “U.S. may disappear from the surface of the earth.”

North Korea’s KCNA warned that Friday the “lunatics can not avoid the punishment of our troops and the people wherever they are on the earth.”

North Korea’s reactions to the statements of U.S. officials and politicians indicates that the isolated and reclusive regime is paying close attention to Western media.