North Korea Claims to Have a New "Ultra-Precision" Missile 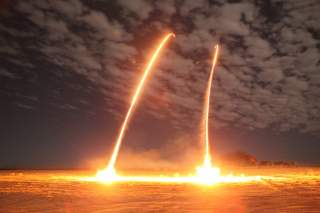 The missile is a “new-type precision guided ballistic rocket capable of making ultra-precision strikes.” The weapon, the third new missile the North has tested this year, is carried on a “newly-developed caterpillar self-propelled” launch vehicle. The missile appeared for the first time in a military parade last month, according to North Korean state media.

Some observers suspect that this missile may be the KN-17 the North unsuccessfully tested several times in April, but that has yet to be confirmed. While experts initially suspected that the weapon might have anti-ship capabilities, the North made to reference to such abilities in related publications in the wake of the recent test.

The fins on the nose cone, however, suggest that the North is experimenting with terminal maneuverability, and North Korean state media has said as much. Monday’s missile test “verified the accuracy of ultra-precision guidance in the re-entry section by more precise late-stage guidance system,” the Korean Central News Agency reported. Such capabilities could potentially enhance the weapons ability to evade enemy defense systems, as well as carry out precision strikes.

The missile, which flew roughly 300 miles, reportedly landed within 23 feet of its target.

While it is unclear whether North Korea has mastered late-stage or terminal maneuverability, this capability might allow North Korea to skirt enemy defense systems, such as the Patriot Advanced Capability (PAC)-3 systems in Japan or the Terminal High Altitude Area Defense (THAAD) system in South Korea. Terminal maneuverability is an advanced alternative to the traditional “saturation” approach, which involves launching multiple missiles simultaneously to overwhelm enemy missile shields. North Korea would likely employ a mixture of saturation and late-stage guidance into an actual strike.

Some observers also suspect that the new missile may be carrying a heavier payload than some of its Scud predecessors. At this time, though, it is unclear what type of warhead — be it conventional or nuclear — the weapon will ultimately carry.