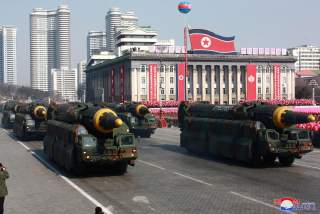 To state the obvious, the only thing worse than blundering into an unnecessary and catastrophic war would be to lose that war. As in sports, however, it is reasonably common in warfare for the underdog to prevail. Few thought that Japan could defeat Russia in 1904, but the Russian Fleet was sent to the bottom of Tsushima Strait, defying most predictions. Likewise, the battle tested French Army with superior tanks was thought to thoroughly outclass its German opponent in spring 1940. And who would have thought little, pesky North Vietnam could take on the United States and win in the mid-1960s? As one seriously considers the tragic possibility of war between the United States and North Korea, some due humility might help U.S. military planners to foresee potential strategic pitfalls.

As is well known, any land war on the Korean Peninsula would be a grueling and grotesquely bloody fight, given the concentration of forces that are well dug in and the difficult terrain that would prevent dramatic maneuvers. Naturally, planners are eager to consider options in the maritime domain, wherein North Korean forces are thought to be rather weak. True, North Korean submariners would seem to have demonstrated a modicum of skill in destroying the South Korean frigate Cheonan back in 2010, but such feats would be harder when U.S. and South Korean forces are on full alert. Indeed, it has been suggested that—assuming Chinese and Russian naval forces do not intervene—U.S. and allied fleets could operate with near impunity off North Korea’s coast to deliver hammer blows, whether by missile, air, or even insertions of special forces.

My colleague James Holmes reminds TNI readers of the possibility of significant U.S. Navy losses in such a war and wisely counsels American planners to avoid “overconfidence like the plague.” His piece logically focuses on the threat of North Korean submarines, but this Dragon Eye column will explore an altogether different North Korean threat to U.S. naval forces detailed in a mid-2017 article from the Chinese journal Naval and Merchant Ships [舰船知识] under the headline “North Korea’s Secret ‘Carrier Killer’: An Analysis of the Capabilities and Employment of the North Korean ‘Hwasong’-9 Ballistic Missile.” [秘密朝鲜版 ‘航母杀手’: 朝鲜 ‘火星’9弹道导弹性能与应用分析].

What is quite disturbing about this piece is the rather sympathetic tone that it conveys: “North Korea like China, and Iran and such countries have many times been subjected to the threat of U.S. maritime supremacy as symbolized by U.S. aircraft carriers. The advantage of deploying land-based missiles presents an obvious counter to the power of aircraft carriers …” [朝鲜与中国，伊朗等国家一样, 多次遭受美国航母为代表的海上优势力量的威胁, 赋予拥有部局优势的弹道导弹武器以反航母能力是理所当然的选择]. This analysis is so interesting precisely because Beijing has walked this road already and not so long ago. Indeed, this North Korean missile is briefly compared to China’s own DF-21D [东风-21丁]. The Hwasong-9 [火星-9] missile is at once described as a “high-precision missile,” but also one that is North Korea’s “very first smart [or literally informationalized] missile weapon.” The article explains that the orders from Kim Jong-un in 2016 were to produce this weapon for precisely the option to strike at “enemy ships” [敌人舰艇].

The article notes that this missile seems to be a SCUD-type derivative. That should be reassuring to American readers who remember that missile’s poor performance decades ago in the Gulf War. The rocket’s is said to be twelve meters long and .8m wide. One may also take comfort in that this weapon system is said to be liquid-fueled and thus harder to launch quickly. Yet what is most disturbing about the design are the four small, triangular steering fins—quite visible in parade photos—at the bottom of the missile’s upper stage. That may imply that the weapon has a warhead capable of independent maneuver [弹头可独立机动飞行], as suggested by Chinese analysis. The missile also has a smaller, but also rather elongated nose, which is said to house a “radio guidance receiver antenna” [无线电制导透波天线窗]. Therefore, the missile does seem to have, at least the outward appearance, of an anti-ship ballistic missile (ASBM) with potentially “enhanced effectiveness for penetrating missile defenses” [增加导弹突防能力]. It is speculated that the North Koreans could have gotten the relevant technology by dissecting the mid-course guidance systems of the S-200 air defense missiles they have. To reiterate, what is rather disturbing here is these authors are likely to know a thing or two about ASBM capabilities since China is the only country thought to wield this capability.

Before hitting the panic button, one should emphasize that Pyongyang might have extreme difficulty in finding and efficiently tracking U.S. warships at sea in order to provide its missiles with the requisite targeting data. The article’s author admits that this is the biggest problem since Pyongyang lacks a system of satellites and its land based radars “only have detection ranges out over the ocean to a distance of about 100km” [对海雷达深侧距离仅为100 公里]. Moreover, the author contends that this missile could be very vulnerable to electronic countermeasures, especially if it is reliant on mid-course transfer of targeting data. There is even some speculation that U.S. cyber hacking could be partially responsible for one of the missile’s test failures. Then, there is the additional problem, according to the Chinese analysis, that the likely explosive yield is inadequate and the “area of destructions is relatively small” [破坏面积比较小].

Despite its problems, the Chinese article concludes that the Hwasong-9 can form a potent weapon of “strategic deterrence” [战略威慑]. The mountainous landscape of North Korea is said to provide Pyongyang with ample terrain to hide these missiles—and the U.S. military is reported to be very poor at Scud hunting. Since they are said to be “a low cost platform” [平台成本底], moreover, the author suggests that North Korea can afford to fire these missiles in volleys. If these missiles can succeed in keeping U.S. aircraft carriers back 500km from the North Korean coast, they can “lower the effectiveness of any attack, and weaken the surprise of air strikes”从而消弱空中打击的突然性, 降低打击较率]. Even if attacking ships proves too difficult for North Korea to execute, the author notes the weapon could still be as a deterrent, since its accuracy would enable its employment against both Japanese and South Korean nuclear power stations.

As stated above, but let’s once again underline that there are very considerable technical barriers to entry here—ranging from ISR challenges to design of a warhead that can survive reentry and then go on to collect data and maneuver onto a moving target. Most Western specialists dismissed this capability out of hand last year when the weapon was first seriously discussed. But dismissing adversary capabilities can sometimes be foolhardy. Thus, U.S. intelligence specialists did not believe that Japan had the requisite technical proficiency to field advanced fighter aircraft or torpedoes in the 1930s and ignored reports stating otherwise in the open press. Many American sailors died in the Pacific War as a result of these analytical mistakes.

The Chinese analysis does not mock North Korean capabilities and believes that Pyongyang may yet master this weapons system. Could this be a type of psychological warfare operation—an effort to bluff by either Pyongyang or Beijing or both? Maybe, but maybe not. To take up the ISR problem briefly, one could certainly imagine that North Korea’s vast force of seventy submarines, 290 torpedo boats and 191 patrol boats could be useful in looking for the U.S. carrier groups lurking a couple hundred miles offshore. Fishing boats might be just as effective, moreover, especially in “phase zero,” (before actual hostilities have begun). North Korea has already experimented with drone surveillance and is quite likely to become much more proficient in that area, as well. Then, there is the unseemly scenario wherein China (or Russia) decide to covertly transfer the targeting data to North Korea. Indeed, China might be quite pleased to see the United States get a “bloody nose” that cannot quite be thoroughly attributed—just a “lucky shot” [幸运的射击] apparently. Finally, there is the rather discomforting possibility that Pyongyang opts to mount nuclear warheads onto these missiles. In that case, the targeting could be imperfect but the results might still be devastating.

The U.S. Navy need not fear North Korea, of course, but nor should it assume an incautious and haughty posture.