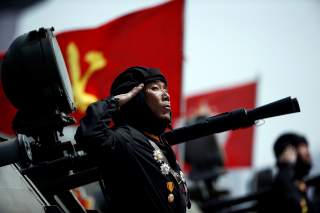 Recent news reports regarding a US intelligence assessment that North Korea has developed a miniaturized nuclear warhead suitable for use with its missiles, combined with an escalating exchange of threats between President Donald Trump and North Korean leader Kim Jong-un, have raised tensions between Washington and Pyongyang to almost unprecedented levels. Nevertheless, neither Trump nor Kim likely seeks all-out war. Absent miscalculation leading to a dangerous armed conflict, the greatest risks to the United States and its allies probably lie in conduct short of war.

In thinking about policy responses North Korea’s nuclear weapons program, it is useful to consider America’s historical experience in confronting emerging nuclear weapons states. Among the most important are the cases in which Washington debated going to war to destroy new and small nuclear arsenals at their most vulnerable. The United States considered and rejected this option in managing both the Soviet Union and China—each of which many Americans saw as not only hostile, but also ideological and irrational—and therefore not deterrable. Washington more easily accepted nuclear weapons programs in non-hostile states ranging from the United Kingdom and France to India, Pakistan and Israel.

The United States did fight a war to prevent Iraq from obtaining nuclear weapons, of course, though Americans later learned that Saddam Hussein was much further away from this objective than many realized. Washington threatened war on Iran in similar circumstances, but ultimately accepted a multilateral agreement that delays the nuclear problem without reliably resolving it. Still, Iran and Iraq are fundamentally different from North Korea because unlike Tehran or Saddam Hussein’s Baghdad, Pyongyang already possesses nuclear weapons. The United States has never sought war with a nuclear-armed state and is not likely to do so now.

For its part, North Korea seems quite unlikely to risk suicide by launching an unprovoked nuclear attack. Leaders typically take such extreme risks only when they believe that such a course is better than the alternatives. From this perspective, Secretary of State Rex Tillerson and Secretary of Defense Jim Mattis are wise to state publicly that the United States does not seek regime change in North Korea. Under the circumstances, taking this threat off-the-table makes good strategic sense.

The Real North Korea Problem May be Short of War

While Iran does not have nuclear weapons, the Iran case is a useful one in illustrating practical US priorities and concerns. Over time, it has become apparent that many of Tehran’s strongest American critics are troubled less by the possibility of an Iranian nuclear attack on the United States, Israel, or other US allies—Iran’s leaders are not suicidal either—than by the idea that if Iran successfully obtained nuclear weapons, it could persuasively deter a conventional attack and thus would have considerably greater freedom to pursue an assertive foreign policy in the Middle East. If Pyongyang develops nuclear missiles capable of attacking the continental United States, North Korea would gain a level of freedom that Iran does not yet enjoy.

Indeed, only two US rivals have this degree of freedom in their foreign policy—China and Russia. Their behavior illustrates why Washington strongly prefers doing whatever it can, at an acceptable cost, to prevent new entrants to the nuclear club.

The core problem is that it is not easy to deter a government that possesses nuclear missiles. Deterrence between nuclear powers requires the deterring state to convince the target government that it may be willing to go to war—up to and including nuclear war—to stop or reverse undesirable behavior. Because nuclear war risks mass annihilation, this threat is rarely credible when the stakes are not already existential or close to existential.

Thus, Washington has deterred Chinese or Russian nuclear attacks and invasions of US or allied territory but has been unable to deter Beijing from its provocative conduct in the South China Sea or to deter Russia from seizing Crimea and supporting rebel forces in eastern Ukraine. During the Cold War, America similarly protected itself and its allies but could not deter Soviet invasions of other countries, such as Hungary (1956), Czechoslovakia (1968), and Afghanistan (1979). Accepting a new and hostile nuclear state is so difficult because it requires accepting similar possibilities and living with constraints on US responses in managing an assertive or even aggressive North Korea.

While US and allied policymakers must take seriously the risk of war, whether nuclear or otherwise, and should plan accordingly, they would do well to give considerably greater attention to North Korea’s options short of war.

Washington has already struggled to respond to such “grey zone” challenges in Europe and in Asia and should expect more of them from a North Korea armed with nuclear missiles. Policymakers and analysts should ask themselves not only how their governments should respond to new nuclear and missile tests—or, for that matter, a nuclear attack—but also what to do if Pyongyang repeats and intensifies past provocative actions, such as its sinking of a South Korean naval vessel, its shelling of South Korean civilians, its not-so-covert international assassinations, and the like.

Deploying additional US military personnel, anti-missile systems, and possibly even nuclear weapons to South Korea and surrounding areas will be important elements in deterring a North Korean nuclear attack or, for that matter, a large-scale conventional attack. But these steps will do little to discourage other provocative and dangerous North Korean behavior. That will require a new and more complex strategy that Washington, Seoul, Tokyo and others should begin to develop if they have not already done so. And like current pressure on North Korea over its nuclear tests, it will be more likely to succeed with help from China and Russia. Since this will not be easy, managing the North Korea problem could well become one of the Trump administration’s principal foreign policy challenges.

This article originally appeared on The Tokyo Foundation.