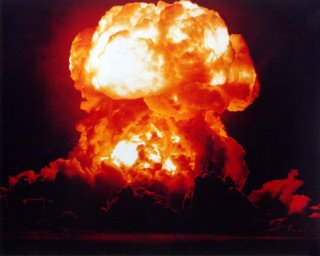 North Korea continues to work on tunnels it used for nuclear test, despite recent tremors according to imagery analysis by the 38 North project at Johns Hopkins School of Advanced International Studies. That might mean that North Korea might test and another nuclear weapon at some point in the not so distant future.

“Recent commercial satellite imagery indicates that despite the continuation of small tremors near Mt. Mantap since North Korea’s last nuclear test, tunnel work at the Punggye-ri Nuclear Test Site is still underway,” reads new analysis by 38 North’s Frank V. Pabian, Joseph S. Bermudez Jr. and Jack Liu. “These efforts continue to be concentrated at the West Portal, leaving the North Portal—where the last five tests were conducted—mostly dormant and likely abandoned, at least for the time being.”

As three researchers note, there has been a high level of activity at one Pyongyang’s nuclear test sites for awhile now. “At the West Portal, there has been a consistently high level of activity since North Korea’s last nuclear test,” the researchers wrote. “This includes a routine presence of vehicles and personnel around the portal, movement of mining carts from the portal to the adjacent spoil pile and signs of fresh spoil being dumped onto the pile. These activities suggest that tunnel excavation is underway at the West Portal, as the North Koreans expand the site’s potential for future nuclear testing.”

At this point, it is highly likely that North Korea will conduct another nuclear test at some point. An underground test would be provocative, but the worst case scenario would be an atmospheric test—potentially on a live nuclear missile to put to rest any doubts about Pyongyang’s nuclear capability. Arms control experts have dubbed such a potential test as a Juche Bird test. Indeed earlier in the year, North Korea threatened such a test.

"It could be the most powerful detonation of an H-bomb in the Pacific," North Korean foreign minister Ri Yong-ho told reporters according to South Korea’s Yonhap news agency. "We have no idea about what actions could be taken as it will be ordered by leader Kim Jong-un."

While its is not certain how such events might unfold, or even if North Korea will conduct such a trial, it is possible that Pyongyang would opt for an end-to-end test of a ballistic missile tipped with a nuclear warhead. The North Koreans might take such an action because many in the United States senior leadership continue to doubt that Pyongyang has such a weapon available for operational use—and that Washington will never accept North Korea as a nuclear state.