North Korea Is Much More Dangerous Than Most People Realize 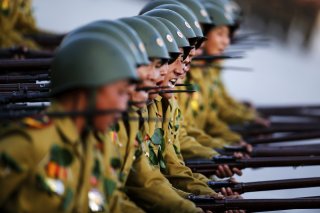 North Korea is able to make its own missile technology and is becoming less dependent on foreign support, breaking the chains that have held it back in the past.

The New York Times, rehashing an inaccurate Washington Post article from a month ago, asserted Monday that North Korea bought the engine for its new intermediate-range and intercontinental ballistic missiles from Ukraine, which while backed by some independent analysis does not appear to be supported by the American intelligence assessments.

U.S. intelligence assesses that the engines used in the Hwasong-12 IRBM and the first stage of the Hwasong-14 ICBM appear to be variants of a Soviet RD-250 engine, but there is no indication that the North procured the technology from Ukraine or any other part of the former Soviet Union as TheNYT suggested. (RELATED: New York Times Report On North Korea-Ukraine Connection May Be Full Of Holes).

“We have intelligence to suggest that North Korea is not reliant on imports of engines,” a U.S. intelligence official explained to Reuters. “Instead, we judge they have the ability to produce the engines themselves.”

There is the possibility North Korea relied on Russian designs, but U.S. intelligence officials believe that if anyone helped the North create a new engine for its ICBM, it was most likely the Iranians, according to The Diplomat.

The U.S. Department of the Treasury sanctioned several Iranian nationals in January last year for their “work on an 80-ton rocket booster being developed by the North Korean government.” North Korea tested a rocket engine last September that reportedly generated approximately 80 tons of thrust.

The engines on the Hwasong-12 and the first stage of the Hwasong-14 are smaller, potentially single-chamber variants of an rocket engine similar to the RD-250 engine, a liquid-propulsion engine. Nonetheless, it is highly unlikely that North Korea obtained the engine technology from Ukraine, which was highly critical of TheNYT report.

Other independent analysts suggest that there are commonalities between all rocket engines.

Melissa Hanham, a senior research associate at the James Martin Center for Nonproliferation Studies, argues that TheNYT report and the research it is based on represent a broader trend in which observers repeatedly underestimate North Korea’s capabilities, including its ability to indigenously develop weapons technology.

North Korea has been rapidly moving away from a dependence on foreign imports and putting increased emphasis on self-reliance concerning weapons development. The North demonstrated this with the transporter erector launchers (TEL) for its new Polaris-2 mid-range ballistic missile. The TEL was produced domestically. “This is the first time we’ve seen an indigenous TEL,” Hanham told The Daily Caller News Foundation in May.

She assesses they are doing the same with engine technology.

“It’s more likely that they are perhaps borrowing some design influence but not actually importing engines at all,” Hanham told PBS’ Nick Schifrin Tuesday.

“I think it’s really common to believe that North Korea is backwards,” Hanham said, “What’s happened in North Korea is that they have marshaled their resources, limited though they are, towards their military program,” clearing the way for significant achievements. North Korea’s “procurement activities over the past few years have definitely shown that they have imported the machine tools they need in order to produce these types of engines,” she added, explaining that the newer engines appear to be indigenous, even if there are commonalities with other engine models developed in other countries.

Schifrin remarked that U.S. intelligence officials tend to share Hanham’s views, not those in TheNYT report.

Countless observers have repeatedly underestimated North Korea’s capabilities, assessing that the North was years away from ICBMs, miniaturized warheads, and reliable re-entry vehicles. The regime successfully tested two ICBMs in July. The Defense Intelligence Agency recently determined that North Korea has the ability to miniaturize nuclear warheads for its missiles, and the Central Intelligence Agency assesses that North Korea has re-entry vehicles that would survive a strike on the U.S.