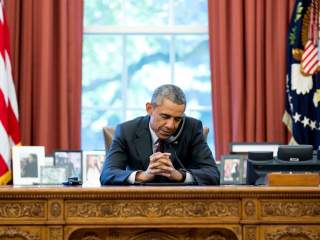 In 2009, President Obama defended his foreign policy by insisting, “I don’t even really need George Kennan right now.” But after North Korea’s latest long-range missile launch, coming on the heels of its fourth unimpeded nuclear test, U.S. foreign policy could use a shot in the arm from the famed diplomat.

Kennan once observed, “The life of an international community can always be inclined to some extent, like a tree, by persistent pressure in a single direction over a long space of time." Over the past quarter century, U.S. policy has failed to adequately prune Pyongyang’s decision trees. The result is not a bonsai, but an overgrown weed that threatens to choke its neighbors.

In his final State of the Union address, President Obama rightly noted that the world still looks to Washington, not Beijing or Moscow, for international leadership. So when North Korea stirs up international trouble, it makes little sense for Washington to continue to turn to Beijing for solutions. It would be much better for Washington to fix its own inadequate policies towards North Korea, thereby shaping both Pyongyang’s and Beijing’s strategic landscape in ways that align with its own.

There are tools for Washington to pare back Pyongyang’s growing threat. It is encouraging that the Senate just passed the North Korea Sanctions and Policy Enhancement Act, the Senate version of the House North Korea Sanctions Enforcement Act, which passed the House overwhelmingly on January 12. This bipartisan bill would empower the U.S. Treasury Department to block North Korean targets and their third-country enablers from the U.S. financial system. It would also restrict the trade of weapons and technology for North Korea’s nuclear program, clamp down on the acquisition of luxury items by the Kim regime and blacklist perpetrators of censorship and human rights violations. The United States should go a step further and designate North Korea as a primary money laundering concern, which would do much to cut it off from the global financial system. It has done this with Iran and Burma, but not North Korea, the only state known to counterfeit the U.S. dollar as a matter of state policy.

Imposing biting financial sanctions on North Korea would exploit a central Pyongyang paradox: North Korea’s people are uniquely isolated from the global economy, but the North Korean regime is preponderantly dependent on it. While the majority of North Koreans rely on local, informal markets for their survival, the Kim regime depends on the global financial system to spend billions on the nuclear program and luxury goods that sustain it. In short, financial sanctions hurt the regime’s elites, not the people they oppress.

Those who argue that China has a critical role to play in curbing North Korea’s nuclear ambitions are right. Washington cannot put the clamps on North Korea by itself. But it can take steps to make Beijing’s continued support of its client state increasingly uncomfortable.

Again, there are tools to do this. The deployment of the American Terminal High Altitude Area Defense (THAAD) missile defense system in Seoul, which Beijing views as a threat to its own growing military prowess, would signal to Beijing that its inaction on North Korea will result in a stronger U.S. military presence in the region.

Moreover, sanctioning entities that facilitate North Korea’s illicit cash flows would put Chinese banks and financial institutions on the hot seat, and force them to decide between doing business with the Hermit Kingdom or the world. With its economy slowing, it is not in China’s interest to have its banks smarting.

For too long, the United States has simply urged North Korea to choose a better path and refused to accept it as a nuclear armed state. That strategy has proven to be principled but powerless.

Passing the Senate sanctions bill is a critical step, but implementing and sustaining it—especially in the face of inevitable provocations from Pyongyang—will be the true test of a policy shift toward North Korea. Washington has made headway against North Korea before, only to surrender its leverage in exchange for empty promises from Pyongyang.

The alternative is for North Korea to continue to bolster its nuclear weapons capability, threaten two of America’s most important allies in South Korea and Japan—and ultimately the U.S. mainland itself—and to hold hostage the twenty-five million people unfortunate enough to be born inside its borders.

In fleshing out his containment strategy toward the Soviet Union, Kennan recognized the limits of U.S. power while maintaining that it can be highly influential. He wrote:

“[T]he U.S. has it in its power to increase enormously the strains under which Soviet policy must operate, to force upon the Kremlin a far greater degree of moderation and circumspection than it has had to observe in recent years, and in this way to promote tendencies which must eventually find their outlet in either the break-up or the gradual mellowing of Soviet power. For no mystical, Messianic movement. . . can face frustration indefinitely without adjusting itself in one way or another to the logic of that state of affairs."

The recent Iranian nuclear deal was a strong reminder of this lesson. Sadly, Washington has not attempted the same strategy of sustained international pressure with North Korea. In dealing with the Kim regime and its Beijing lifeline, U.S. foreign policy could use a healthy dose of George Kennan right now.

Zach Przystup is the Assistant Director for Global Executive and Diplomatic Education at The Fletcher School at Tufts University, and a Non-resident Sasakawa Peace Foundation Fellow at Pacific Forum CSIS.