Is North Korea Serious about Talks with America and South Korea? 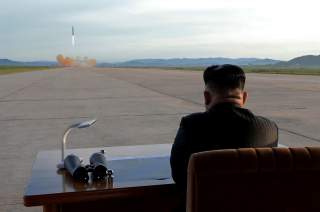 Even so, given the centrality of the alliance to Seoul-Washington policy, Pyongyang has some wobble room: “I would guess: lifting of sanctions; diplomatic normalization; and asking for a peace treaty,” said Choi.

The second condition for denuclearization is a security guarantee, but it is unclear what Kim could accept. North Korean state media frequently refers to the guarantees offered to Libya in return for the abandonment of its nuclear programs, which did not stop a Western alliance teaming up with rebels to overthrow the Gadaffi regime.

“Guarantees of regime survival are impossible,” Lankov stated flatly. “American, Russian or Chinese promises are hardly worth the paper they are written on, and North Korea faces a dual threat: foreign attack and domestic rebellion.”

In the latter case, it seems unlikely that Washington would guarantee sanctuary for the Kim family or regime officials, given their history of human rights abuse, Lankov added.

North Korea has a long history of breaking agreements, and Washington has also sewn grounds for mistrust: It did not follow through on its obligations under the 1994 “Agreed Framework” agreement, and, according to some, undermined the now-defunct six-party talks in 2005 by attacking North Korea over its international banking operations. Hence, both parties have reason to distrust the other.

Still, given Trump’s pride in his negotiating skills and his ideological flexibility – he appears more willing to strike North Korea, and also more willing to meet North Korea’s leader than either of his predecessors – some outcome is feasible. “We may see progress on shallow issues surrounding denuclearization, as the US is likely to give it a try,” said Chad O’Caroll, owner of specialist media NKNews.

“North Korea will not realistically discuss denuclearization on any concrete terms: They said this as necessary lip service to start talks,” Lankov said. “They saw Iraq, Libya and Ukraine; they are not going to go that way.”

Given this, the realistic options are a manufacturing freeze, a testing moratorium, the return of international inspectors and abandonment of some components. “Maybe Kim can be blackmailed or bribed into surrendering some of what he has got, but it will be difficult and costly,” Lankov added.

Another issue is whether the Trump administration has the diplomatic bandwidth to handle high-level, high-priority talks with North Korea. Washington lacks diplomatic ties with Pyongyang and it currently has no ambassador in Seoul. Following the surprise withdrawal of academic Victor Cha from the running, there is no obvious candidate in sight, and the recent retirement of the US Special Representative for North Korea Policy Joseph Yun leaves another gap.

Then there is the American president’s demands for results. “My worry is that Trump might be intoxicated with success, he will demand more and more and sooner and sooner and sooner,” Lankov said. “The risk is if North Korea in any way tries to cheat the US, that is very dangerous, because this is a US president who does not like to be embarrassed,” added O’Carroll. “He will not tolerate these tactics by North Korea.”

From a broad perspective, Tuesday’s announcement extends the spectrum of reward and risk to limits that are wider than ever. “This could be a game changer,” mused Lankov. “But if it falls apart, the risks will be even higher.”