Is North Korea Using China's Satellites to Guide Its Missiles? 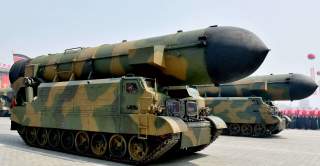 As North Korea fires more missiles in its drive to build and test rockets to reach the US mainland, one issue largely overlooked is that satellites are among methods used to guide such weapons to their targets.

Pyongyang doesn’t have a satellite navigation network, raising speculation that if it is using such a guidance system then is it tapping into China’s?

While information on military programs in the North is difficult to verify, reports going back to 2014 show that North Korean engineers were in China for technology training on how the country’s satellite navigation system — known as Beidou or Compass — worked.

Beside Beidou, the other main satellite navigation options for North Korea are the Global Positioning System of the United States and the Russian system known as Glonass.

“While I would never exclude the possibility of Glonass applications for N Korea’s rocket and missile systems, Beidou looks like a more reasonable solution for N Korea,” said Yu Koizumi, a research fellow at Japan’s Institute for Future Engineering, in an email.

Russia imposed an embargo on transfers of weapons and military-related technologies to North Korea after its nuclear tests in the 2000s, although it’s unclear if Glonass-related equipment was included, said Koizumi, a specialist in Russia’s security policy.

Launches of Beidou satellites started in 1994 and have resulted in China deploying a system in East Asia and beyond that is akin to the GPS. Like GPS, Beidou supports two varieties of service: One for civilian and commercial use, and another more robust, supposedly jam-proof, and more precise for military users.

When 59 Tomahawk missiles launched by US Navy destroyers struck their targets in Syria in early April, they were probably guided to their targets by GPS, although Tomahawks are equipped with other guidance systems as well.

Japan, which has its own variant of GPS that will ultimately involve 7 satellites in orbit over Japan and the surrounding region, is now seeking to acquire Tomahawk missiles or develop their own version.

While it hasn’t been confirmed that the military version of Beidou is being used by North Korea, it seems questionable that the civilian version would be applied to the precision-guided munitions (PGMs) that Pyongyang has hidden away on mobile missile and rocket launchers.

The civilian version of Beidou would be vulnerable to electronic jamming by the US, Japan or South Korea and that is unlikely to be acceptable to Pyongyang’s military in the event of a conflict.

During the April 15 military parade in Pyongyang, an upgraded KN-09 300mm Multiple Launch Rocket System (MLRS) was on display, which has a range of 200 kilometers.

According to James Lewis, senior vice president at the Center for Strategic and International Studies in Washington DC, it is feasible that the KN-09 could use a hybrid Beidou and Glonass signal to enhance its reliability and accuracy.

Lewis described the KN-09 as a funny system that is copied from a Chinese MLRS, which itself was copied from a Russian MLRS that used Russia’s Glonass system.

“It would not be that hard for the Chinese to add Beidou,” said Lewis via email, adding that solid evidence isn’t available.

North Korea could also use terrain mapping and other more sophisticated capabilities, such as inertial guidance mounted aboard its medium and long-range missiles.

Still, the prospect remains Pyongyang may be using Beidou to make sure missiles aimed at US soldiers on military bases in Asia hit their targets. It’s the same case for North Korea’s stated intention to build missiles that can reach the continental US.

This scenario demands that Washington get clarification from Beijing about the extent if any of North Korea’s access to Beidou, especially considering the comment by the China military expert cited earlier.

As concerns mount over the escalating efforts by Pyongyang to improve its missile systems as well as nuclear weaponry, China plans to add at least 30 new Beidou satellites by 2020 to join the 20-plus currently in operation, greatly adding to its accuracy and capabilities.

This expansion will include construction of dozens of monitoring stations on the ground inside China as well as in other countries.

Ran Chengqi, director of the China Satellite Navigation Office, last year told a news conference that this will improve the accuracy of the Beidou system down to decimeters rather than meters.

The civilian dimension is significant in itself. In 2015, more than 400 million Beidou-equipped smartphones were sold in China, according to the Global Navigation Satellite System and Location Based Services Association of China.

Today, Chinese smartphone users with Beidou-based services number between 700 and 800 million and by 2020, Beidou’s global market footprint should expand to 60 percent of total devices sold or roughly three times the number in 2015.

Meantime, Beidou plays a significant role in all aspects of China’s military operations, including in the South China Sea for intelligence gathering as well as two-way messaging.

In January, Jordan Wilson, a policy analyst at the US-China Economic and Security Review Commission, said the Beidou program could cost China as much as $US10 billion by 2020.

He described China’s deployment and development of precision-guided munitions as “the central feature of China’s anti-access/area denial objective within its People’s Liberation Army’s missions, intended to make a US military intervention in the Western Pacific more costly.”

North Korea’s anti-access/area denial objective is complementary to China’s, and thus not outlandish to assume that Beijing has granted its neighbor access to the Beidou military signal capabilities.

China has always been a willing endorser of a well-armed North Korea and seldom if ever criticizes Pyongyang’s efforts to expand and enhance its arsenal of conventional weapons.

Right now, though, the US needs to focus on the scope of Beidou’s role in North Korea’s missile program and initiate a discussion about it with Beijing.

Perhaps the question of Beidou and its role in guiding North Korea’s growing fleet of drones should be on the agenda, too.