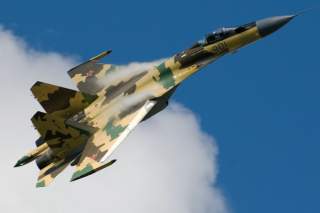 North Korea’s Kim Jong-un sent a special envoy to Moscow to ask Russia to sell him its most advanced fighter jets, South Korean and Russian media are reporting.

According to the original report, the request was made in November when Choe Ryong-hae, North Korea’s number two, traveled to Russia as Kim Jong-un’s special envoy. During the trip, Choe met with Vladimir Putin and gave the Russian president a letter from Kim.

As Dave Majumdar wrote in The National Interest last month, the Su-35 “is the most potent fighter currently in operation with the Russian Air Force. The powerful twin-engine fighter, which is an advanced derivative of the original Soviet-era Su-27, is high flying, fast and carries an enormous payload. That, combined with its advanced suite of avionics, makes the Su-35 an extremely dangerous foe to any U.S. fighter, with the exception of the stealthy Lockheed Martin F-22 Raptor.”

The 4++ generation fighter jet would be a substantial upgrade over the North Korean Air Force’s current arsenal, which mostly consists of outdated Chinese and Russian platforms like the MiG-21 and Su-25. North Korea purchased these aircraft from Russia in the waning days of the Soviet Union.

North Korea has long sought more modernized aircraft to compete with the South Korean and American fleets. However, as the military source told JoongAng Ilbo, “The North produces many weapons systems domestically, but it appears to have sought Russia’s help because building fighter jets requires more complex technologies.”

(Recommended: 5 Weapons Russia Could Use in An Arctic War)

Even if Russia won’t sell Pyongyang the Su-35, Moscow has shown an interest in strengthening ties to the Hermit Kingdom in recent months. Last month, a Kremlin spokesperson announced that Putin has invited Kim Jong-un to Moscow in May of this year to celebrate the 70 anniversary of Nazi Germany’s defeat. If Kim accepts the invitation, it would be his first trip abroad since taking over power in North Korea following his father’s death in late 2011.