A North Korean Nuclear Weapons Test in the Pacific Ocean: An Act of War? 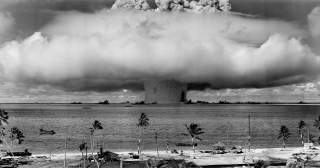 If North Korea decided to launch a nuclear test in the Pacific, would that be an act of war?

Reporters posed the question to U.S. Secretary of Defense, retired U.S. Marine Corps. Gen. Jim Mattis, but his staff intervened before he could answer. However, Mattis did suggest that such an atmospheric blast would be a grossly irresponsible act.

“This would be a shocking display of irresponsibility toward global health, toward stability, toward non-proliferation,” Mattis told reporters enroute to India on Sept. 24.

Indeed, one of the reasons that Mattis did not answer the question is because it is a delicate matter from a policy point of view. Jeffrey Lewis, Director of the East Asia Nonproliferation Program at the James Martin Center for Nonproliferation Studies at the Middlebury Institute of International Studies at Monterey, is of the opinion that a North Korean nuclear test in the Pacific would not necessarily be an act of war.

“No,” Lewis told The National Interest. “The ocean is really big; although there would probably be more than a few ships that would see the explosion, I suspect the odds are fairly low that anyone would be hit.”

James R. Holmes, professor of strategy at the U.S. Naval War College told The National Interest that a nuclear test in isolation could not necessarily by itself be considered an act of war.

“This is another gray zone,” Holmes said.

“Look at it from a legal standpoint. Congress rejected the Comprehensive Test Ban Treaty during the second Clinton term, and no administration has made the argument we make with regard to the law of the sea, i.e., that we observe the UN Convention on the Law of the Sea as a matter of policy because we accept it as customary international law. Additionally, Pyongyang withdrew from the Nuclear Nonproliferation Treaty in 2003.​ So from a legal and political standpoint, it's hard to depict a test as an infraction of international law punishable by military force.”

There is a possibility that the United States could persuade the United Nations Security Council to act on the issue—but that would depend on the kind of damage a live-fire North Korea nuclear test might do.

“Chances are it would come down to the politics of getting a Chapter VII resolution through the UN Security Council, which in turn depend on how much harm such a test did and to whom,” Holmes said.

“It is a nightmare trying to clear a sea area just for naval gunfire or missile tests, trust me; hitting a foreign vessel would be a very bad thing from a political as well as a humanitarian standpoint. Now multiply that difficulty manifold and you have a serious conundrum if you're the tester. It's hard to see how any government could claim it had filed the necessary notices to mariners and airmen and taken all possible actions to keep bystanders from harm. Think about all the nuclear effects from an air blast, let alone from a surface blast if that's what Pyongyang attempted. You are potentially talking about widespread, lingering harm. The days of the Bikini tests are long gone, and I doubt the international community would put up with their return. Nor should it.”

Another possibility is that the U.N. Security Council might authorize the use of force or that the United States might somehow invoke the right to self-defense.

“So, the administration could conceivably get an Article 39 finding through the council, leading to a use-of-force resolution,” Holmes said.

“Or, obviously, if a test damaged American sovereign territory, that would open up the way for the administration to exercise the inherent right of self-defense. What happens then is anyone's guess; the president made unequivocal remarks about this at the United Nations, and presumably would have to make good on his words.”

The problem, of course, is that a war with a nuclear-armed rival could lead to disastrous consequences. However, in reality, it is likely that a North Korean live-fire nuclear-tipped intercontinental ballistic missile (ICBM) test is some time away. Moreover, Pyongyang would likely give some notice before conducting such a test.

“I think they’ll give a warning in advance,” Joshua H. Pollack, editor of The Nonproliferation Review and a senior research associate at the James Martin Center for Nonproliferation Studies, told The National Interest.

“That does risk an Aegis intercept attempt, of course, but they might just give no more than a day’s notice and go somewhere in the South Pacific, perhaps.”

If the North Koreans do make an attempt at conducting an end-to-end test of an ICBM, it will be to silence potential doubters.

“That’s the point—to shut down the doubters and get us to take them a bit more seriously,” Pollack said.

“I figure they’ll do a couple full-range ICBM tests first.”