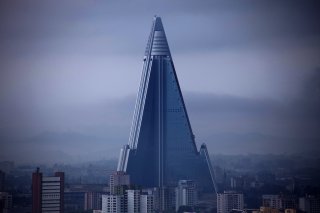 North Korea’s indigenous missile program is advancing rapidly, but it looks like they’ve had some help from their friends.

The North carried out around two dozen rocket and ballistic missile tests last year, and so far this year, it has launched at least seven. They are making progress, but it looks like the parts for their weapons are not originating in North Korea. Many of the essential components of North Korea’s ballistic missiles are foreign-made and were provided by companies operating out of China, reports the Washington Post.

North Korea launched an earth observation satellite into orbit in February of last year using an Unha-3 rocket, which some observers believe to be the predecessor of a potential North Korean intercontinental ballistic missile. The North attached explosives to the various stages of the rocket to prevent other countries from recovering the parts after separation; nonetheless, South Korea was able to recover enough parts to reconstruct the rocket.

Post-recovery analysis revealed that the parts were not indigenously produced; rather, they were foreign-sourced components provided by firms in China, a recent United Nations report concluded.

UN resolutions prohibit countries from exporting materials capable of being used to develop missiles and nuclear weapons to the North, which has threatened to use weapons of mass destruction against the U.S. and its allies on countless occasions.

More than 80 percent of all North Korean imports come from China, and while the Chinese government denies that its companies export illegal products, evidence suggests that this practice is not uncommon, especially in the border regions. For instance, an Institute for Science and International Security report revealed that Shenyang Machine Tools Company in Northeastern China sent banned products to North Korea, a country with which the company maintains close ties, as recently as late 2015.

Chinese middlemen have also reportedly been moving Western products into the North. The products are sold to China on the condition that they not be shipped to North Korea, but Chinese companies have, at times, failed to uphold their end of the agreement.

Whether the Chinese government is complicit in this situation or is simply unwilling to properly address the issue remains unclear. For years, China has allegedly skirted UN resolutions and sanctions using loopholes. While a nuclear North Korea armed with sophisticated ballistic missiles is as undesirable for China as it is for the U.S., Beijing prefers the stability of the present status quo to the chaos that could result from regime collapse or war.

What is clear, experts told the Washington Post, is that the parts that have entered North Korea via China have allowed the impoverished and isolated regime to develop weapons that it might not have otherwise been able to do on their own.

China has, however, recently stepped up its efforts to rein in North Korea.

Last September, China arrested 11 corporate executives of Hongxiang Industrial Development Co., including founder Ma Xiaohong, for exporting dual-use products that can be used in the production of chemical weapons; however, Beijing pushed back when the U.S. sanctioned the company in a unilateral action.

China banned all shipments of coal — North Korea’s primary export — in February after Secretary of State Rex Tillerson called on China to “use all available tools” to rein in its neighbor, and just last week, as President Donald Trump was meeting with Chinese President Xi Jinping, China issued an order to its trading companies to return North Korean coal and turn away trade with North Korea.

Trump and Xi agreed to cooperate on the North Korea issue during a phone call Wednesday, but as such promises have gone unfulfilled in the past, only time will tell whether this time will be any different.