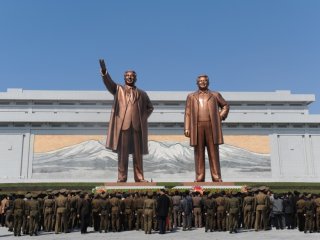 Last week Kim Jong-un marked the fourth anniversary of his succession to leadership and his father’s death in North Korea. The leadership transition reignited discussion among North Korea watchers over how and whether the regime would be able to survive. Two years later, Kim had his uncle, Jang Song-thaek, executed for treason, sparking another round of speculation over whether the execution reflected a step toward consolidation of power under or was evidence of infighting that might lead to a leadership vacuum in Pyongyang. Because North Korea’s totalitarian system requires isolation to perpetuate political control yet is increasingly penetrated by markets and information, speculation about North Korea’s collapse will persist, and outside observers will judge that Kim is playing a losing hand.

For this reason, policy wonks continue to discuss whether North Korea might collapse and what challenges might emerge out of such a scenario. Nevertheless, seldom discussed is how a unified Korea might behave or how the U.S.-South Korea alliance might or might not adapt, change or even dissolve as a result of unification. Answers to these questions, of course, are speculative and are difficult to conceptualize, but Sue Mi Terry, managing director for Korea at BowerGroupAsia and former CIA analyst, seeks to tackle them straight on in her discussion paper, “Unified Korea and the Future of the U.S.-South Korea Alliance.”

Starting with the most likely scenario that unification will occur with South Korea absorbing the North without a devastating war, Terry argues that a unified Korea would face three possible strategic choices: continuing the alliance with the United States in some form, becoming an independent regional power and tilting toward China. A multilateral security arrangement or a collective security mechanism is unlikely to materialize as an option.

Continuing the alliance with the United States: In this scenario, Korea continues its alliance with the United States in some form. Seoul could seek to continue the alliance for many reasons. A unified Korea would still need a nuclear umbrella and would have to deal with other great powers in Northeast Asia, namely China, Russia, and Japan. The alliance would also reduce Seoul’s defense burden. Unification, however, might alter the alliance, as calls to withdraw U.S. troops from the Korean peninsula might emerge in Washington. In addition, without the North Korean threat, the alliance could likely be geared even more toward common objectives beyond Northeast Asia to other parts of the world.

Becoming an independent regional power: In this scenario, Korea discards its alliance with the United States, seeks to pursue an independent foreign policy as a nonaligned power, and even possibly keeps North Korea’s nuclear weapons. This scenario could come about as a result of increasing capability, confidence, and nationalism of Korean people. An independent Korea would develop closer relations with China and Russia while moving away from the United States, pitting the great powers against each other. This scenario could be destabilizing for the region. A unified Korea could also seek to become a balance end conciliator between the great powers. Terry concludes that this scenario is less likely than the first.

Tilting toward China: In this scenario, a unified Korea moves away from the United States and aligns with China instead, given that China has a robust economic relationship with South Korea and is a rising military power in the region. Furthermore, there is a strong strain of anti-Americanism, which remains a sizable minority sentiment, in Korea. Terry, however, argues that this scenario is the least likely because Koreans are wary of Chinese domination of their country. More problems relating to resources and border disputes could also arise if Korean unification occurs.

Terry concludes her paper by arguing that the United States has an interest in maintaining its alliance with Korea even after unification because the alliance is a force for stability in the region. To ensure that the two countries retain their alliance after Korean unification, she recommends that the United States prepare for all Korean unification scenarios, work to upgrade and broaden the current U.S.-Korea alliance, commit in advance to preserve the nuclear umbrella over unified Korea, commit to aid Korea during the process of unification, form a trilateral contact group of officials from Washington, Seoul, and Tokyo on post-unification security on the Korean peninsula, and eventually bring China into the contact group.