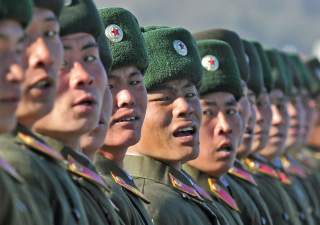 “The TV camera focuses on Kim Jong-un. “Fellow countrymen, I am determined to make sure that you have not endured your many sacrifices in vain,” he says. “We have forced the world to notice us and respect us, and now we need to translate that achievement into food, clothing and shelter for our long-suffering population.

“Today, I am ordering military storehouses opened. We will distribute a million tons of war-reserve rice to our citizens, who need to eat well because we have a huge task ahead transforming what almost every countryman realizes is a sick and broken economy..

“We cannot afford to waste our energy and resources on antagonizing other countries. Thus we will shrink the military. We welcome assistance from international institutions and from other countries, including especially our East Asian neighbors, whose highly successful economic models we will adapt to our needs.

“We are prepared to negotiate with our Southern brothers an agreement for each side to drop its claims over the territory of the other. We must postpone discussion of Korean reunification until we can close much of the enormous economic gap, which currently makes it virtually impossible for Northerners and Southerners to contemplate living together as equals under a single government.

“In exchange for appropriate assurances of non-intervention and the withdrawal of sanctions, we are prepared to halt development of nuclear, chemical and biological weapons and shift our resources to programs that will peacefully advance our economy.”

Unbelievable, right? The preceding is from my imagination, but illustrates the magnitude of change that might be involved in a truly strategic shift by North Korea’s ruler.

In what headline writers excitedly described as an “olive branch,” Kim’s representatives met on Tuesday with their Seoul counterparts to discuss issues, starting with an agreement that the North would participate in the Winter Olympic Games next month in Pyeongchang, South Korea. More talks are expected.

Don’t be distracted. Having covered and studied North Korea for 40 years, I feel comfortable saying that its long-term strategy since the Korean War ended in stalemate in 1953 has been and remains to persuade the United States to remove its troops from South Korea and withdraw its security guarantee.

Then, as defectors who have worked in sensitive military and political positions have repeatedly testified, when an appropriate opportunity presents itself, the North intends to conquer the South – regardless of the Southern population’s preferences.

What we are seeing – the North’s recent demonstration of nuclear might followed by a charm offensive aimed at South Koreans – is simply a tactical move within the same old strategy. Both Americans and South Koreans need to understand this, and bear it in mind even as they seek to use talks to calm tensions and avert outright warfare.

Concessions that the North will demand include reductions in mutual US-South Korean defense measures, especially annual training exercises that keep the two countries’ militaries working as a team.

South Korean President Moon Jae-in has long been predisposed to engagement with the North, but even US President Donald Trump, who had threatened to “totally destroy” North Korea, has indicated he is willing to go along to some extent.

Trump agreed to Moon’s proposal to postpone joint exercises during the Winter Games. He tweeted last Thursday that “talks are a good thing,” boasting that his own firm approach had made them possible.

North Korea’s nuclear weapons are intended partly to deter a “decapitation” effort by the US and/or South Korea to take Kim down. But Pyongyang’s weapons of mass destruction also fit its overall strategy. The idea is to use the threat of WMD beyond the Korean Peninsula to hasten the exit of the Americans who now protect the South. “Get out and we won’t bomb Los Angeles” – that’s the message North Korea has been sending.

South Korean opposition leader Hong Joon-pyo was quoted by Yonhap News as saying on December 27 that North Korea’s intercontinental ballistic missiles “are designed to block US participation in a war when the North makes an attempt at unification by force.”

Defectors have previously testified that the North Korean military contemplated use of WMD to take South Korea. One, Lee Chong-guk, a former sergeant assigned to the Bureau of Nuclear and Chemical Defense, said his superiors had boasted of having enough chemical weapons to wipe out the South Korean population. It would be impossible to make many Southerners adopt the North’s ideology, he said senior officers told him – so most would have to die.

But let’s return to the scenario outlined above. Why is it such a stretch of the imagination to imagine Kim taking a major step to shift his impoverished country into the mainstream of Asian economic tigerdom – a move that would garner approval from virtually every other regional player, even Pyongyang’s main ally, Beijing?

One big reason is the fact that the Kims are a dynasty. The youngest member feels compelled to uphold policies promoted by his grandfather Kim Il-sung, whom Josef Stalin installed as founding ruler in the 1940s. Kim Sr went on to squeeze out about as much success as the communist model was capable of producing before the 1970s, when his economy began to lag noticeably behind that of its capitalist foe to the south.

Seeking legitimacy and popularity, the grandson has modeled his public persona on the grandfather, from clothing to hairstyle to girth. (And, some say, even facially, via plastic surgery.) If he admitted that Grandpa’s ideas are irrelevant and useless today, he may wonder, what would be the basis of his own demand to be revered as something like a living god?

Even if there isn’t actually a manual for training up-and-coming Kim dynasts, there might as well be. Consider a key fact: They don’t study any variety of economics that, after the fall of the Iron Curtain, would be considered even remotely valid in more than a handful of countries.

Kim Jong-il, the middle member of the dynasty, ruled from 1994 to 2011. He had been a political-economy major at Pyongyang’s Kim Il-sung University in the 1960s. But defectors familiar with the curriculum have said that what those studies entailed was celebrating the wonders of communism and rejecting the evils of capitalism.

Kim Jong-il found showmanship more interesting. For his entire career his focus was on propaganda. Persuade the workers to work harder? Forget about raising pay when they do well. Inspire them, instead, with movies or stage musicals that extol patriotism and diligence.

Toward the end, the middle Kim came to understand the importance of material incentives. But – probably for the same reasons that keep his son in the family harness – Kim Jong-il never brought himself to overturn his father’s socialist rules.

It’s probably even more important that Kim dynasts are taught that winning over South Korea is all. Coming in second – surviving for a while, but losing in the end – is not acceptable.

Army First Lieutenant Lim Yong-son, after his 1993 defection, passed along to me a bit of army lore regarding a time after Kim Jong-il was promoted to marshal. His father, Kim Il-sung, asked a couple of senior officers what would happen if war broke out and North Korea lost. “We would never lose,” they replied.

“But what would happen if we did lose?” Kim Il-sung asked his newly marshal-ranked son.

“If we lose, I will destroy the world.”

Professors of political-military strategy reportedly tutored Kim Jong-un. Whether or not he privately recognizes flaws in the system he inherited – and it is true that he has made minor changes – he has left it largely in place throughout his six years in power.

He’s also, like his father, more of a showman than an economic thinker. Much of his domestic expenditure has gone on showcase projects, complete with entertainment and recreation facilities, to impress outsiders and please the top elites in Pyongyang.

But Kim doesn’t need to be a thinker to maintain North Korea’s steadfast policy emphasis on inspiring a US exit from South Korea that would leave the South more open to conquest. In contrast to Trump’s fraught band of newbies in the White House, a number of veterans serve Kim.

Kim Yong-nam, an 89-year-old specialist in foreign affairs, for example, is the official head of state, the one who greets top foreign dignitaries. He was already in charge of foreign policy when I made my first trip to Pyongyang in 1979. He invited me to lunch and for five hours attempted to persuade me and, via my paper, Washington officials, that the US should withdraw its troops.