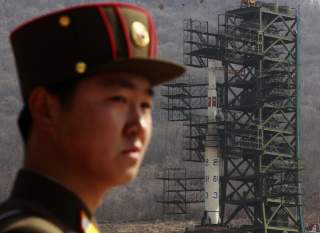 The Hwasong-14 missile that arched over North Korea on July 4 was hailed by its leader as an intercontinental ballistic missile (ICBM), “capable of reaching anywhere in the world.” The announcement sparked headlines across the world, prompting frantic diplomatic activity and launching a flood of comment and analysis.

This should not be surprising: while most of Kim Jong Un’s missile tests in the last couple of years had only regional implications, the debut of an incipient ICBM has global ones. A nuclear-tipped, global range ICBM in North Korea’s arsenal could change the balance of power not only in East Asia, but the entire world.

As a result, the question of what this missile really was, and what it could or couldn’t do, is being fiercely debated between diplomats and analysts. Was it a hoax? Was it a propaganda ploy? Or was it a true ICBM, or at least a precursor to an ICBM? These questions impact directly on the global policies of the major powers – hence the frantic effort to solve the mystery.

The View from Moscow:

Russia maintains that the July 4 flight involved nothing more than a garden variety medium range missile that reached a modest altitude of 535 km, stayed in the air 14 minutes, and splashed at a distance of 510 km.

This data, attributed by the Kremlin to its recently modernized Missile Attack Warning System, stands in sharp contrast to North Korea’s claims that their missile demonstrated ICBM level performance, reaching an altitude of 2802 km, flying for 37 minutes and splashing down at a distance of 955 km.

So why did the Russians go on a limb on this issue? Two possibilities: either their Missile Attack Warning System is myopic, or they needed to downplay the July 4 test out of political expediency.

The latter is more likely. Trivializing the North Korean achievement provides Russia with an excuse for blocking UN censure of its client while at the same time rebuking that same client for excessive bluster, which rocks the boat of Russia’s power game in East Asia.

Two other theories about the July 4 missile test recognize its achievements but differ on its significance.

At the core of this claim are the assumed dimensions and weight of the July 4 missile. It is clearly derived from the shorter range HS-12 tested last May, and the newer HS-14 looks like an HS-12 with an added stage and clearly shares the same booster rocket motor as its older sibling.

The assumed diameter of the HS-12, which was used as the first stage of the HS-14, is 1.5 meters. This, in addition to the total length of the missile as derived from images of the missile on board its giant 8-axle mobile launcher, provides an approximation of the missile take-off weight through a series of simple ratios between dimensions and weights that are typical to such missiles.

The estimated total weight comes to about 25 tons. This is too low for a true ICBM that can “reach anywhere in the world” – in comparison, the Topol M, a true global ICBM, weighs 49 tons. Hence, according to this school of thought, the July 4 HS-14 carried a negligible payload to demonstrate a maximum range of 6000 km – enough to hit Alaska but no further than that.

Moreover, this range cannot be extended by further lightening up of the already lightweight missile and anyway, since the missile is liquid fueled, it could never become a road mobile ICBM. According to this theory, the furor over the July 4 missile has been exaggerated: no major city in the U.S. will ever be threatened by it. The threat from North Korean road mobile nuclear ICBMs will materialize only when they field solid propellant ones, many years in the future.

In the other corner is the alternative theory that the July 4 test demonstrated a global range ICBM, or its least a precursor, which could deliver a 500 kg payload (enough for a first generation nuclear warhead) to a range of nearly 10,000 km – enough to threaten all major cities on the West Coast and further inland. Proponents of this theory agree that the July 4 missile was an HS-12 with an added second stage, but believe it is much heavier than 25 tons.

The key assumption here is that this second stage is a shorter version of the third stage of the earlier HS-13 – the ICBM-like missile first paraded in Pyongyang back in 2012. This makes the first stage (i.e. the HS-12 missile) significantly wider than 1.5 meters, which in turn makes it much heavier than the 25 tons “propaganda missile” theory. With a weight of 40 tons or more, the July 4 missile was a truly global range ICBM. Hence, the time to worry is not many years from now, but right now.

Who is right? As we have seen, small differences in assumptions lead to dramatically contradicting strategic conclusions. Pyongyang strictly controls the information it releases, and many researchers find it devilishly difficult to derive reliable dimensions from its released photos. Still, and without recourse to controversial measurements from distorted images, one can use corollary evidence to judge which of the two theories is more plausible.

One such evidence is the new rocket motor with its four accompanying verniers (steering rockets) that powered both the HS-12 and the first stage of the July 4 missile. When tested in March, it was touted by the North Korean as capable of producing 80 tons of thrust in 200 seconds. With the newfound penchant of Kim Jong Un to brag about his achievements rather than to hide them, there is no good reason to reject this claim.

This value indicates the ratio of the rocket motor thrust and the missile’s weight. A motor thrust of 80 tons would indicate a missile takeoff weight of about 53 tons. This does not necessarily mean that the July 4 missile was that heavy: liquid rocket motors can be throttled down to perhaps as much as one-half of their maximum thrust.

Why would the North Korean engineers make such a powerful rocket motor with relatively lightweight missiles? More likely, the missiles are not lightweight at all. This chain of reasoning tends to imply that the July 4 missile was considerably heavier than 25 tons and might have weighed at least 40 tons and perhaps more.

Next, let’s consider the giant launch vehicle used to carry the July 4th missile to its launch pad: the Chinese version of the Russian MAZKT79211 designed for the Topol M, a 47-ton missile. The first stage of the test was the HS-12 missile, which was carried during its first test by the ex-Soviet MAZ 547, designed for the 37 ton SS 20 IRBM.

Why would the North Korean engineers use such massive vehicles to carry relatively lightweight missiles? Again, it is more reasonable to assume that both missiles are not “lightweight” at all, and that the July 4 missile was significantly bigger than the “propaganda ploy” theory suggests.

The July 4 missile was considerably heavier than 25 tons and might have weighed at least 40 tons.

Thus, while incontestable evidence to the true size and weight of the July 4 missile is lacking, the indirect evidence tends to support the existence of a heavier rather than a lighter version, giving it truly global ICBM capability rather than a mere propaganda shot. Of course, the North Koreans could have lied about the thrust of the new rocket motor and might have used oversized launch vehicles to create a false impression of giant missiles and global range ICBMs.