North Korea’s ICBM Test: Everything You Need to Know 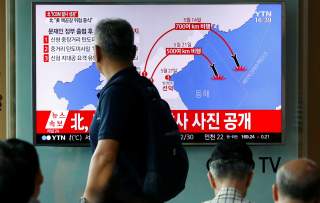 On the morning of July 4th – Independence Day in the US – another ballistic missile roared skywards in Northwest Korea, deep inside the territory of the DPRK. About 40 minutes later, it splashed into the sea of Japan nearly 1000 kilometers downrange from its launch pad. This could have been unremarkable by itself, except for the steep trajectory of that missile. Japanese sources said that it reached an altitude of "considerably more than 2500 Km". Soon after, North Korea announced the peak altitude was in fact 2802 Km. This altitude/range capability would translate to a range of intercontinental scale if the trajectory were flattened out. North Korea has just fired its first ICBM. Welcome to the scary world of Pyongyang Intercontinental Inc.

North Korea watchers were half expecting this to happen sometime around now. The chubby Young Leader has promised an ICBM shot "soon." July 4th is a favorite date for North Korean missile shots, to signal their disdain of their imagined nemesis, the United States. Yet this year's fireworks held several surprises, the first of which was the missile itself. What took off from the launch pad was unlike any missile seen before in North Korea's ritualistic military parade. To date, two types of ICBM size missiles were paraded: the three-stage HS (Hwasong) 13, first appearing in the 2012 parade, and the two stage HS-14 that rolled down Pyongyang main thoroughfare in 2015. North Korea dubbed the July 4th missile "HS-14", but the images released by it exhibited significant differences. While the tested missile was clearly two stage, the second stage was not identical to that of the paraded HS-14. In fact, it resembled the third stage of the older HS13. At the same time, its front end resembled nothing seen before. This was a new, single warhead reentry vehicle with a blunter (and admittedly more realistic looking) nose tip.

Photos of the ascending missile taken from below revealed what might be even a bigger surprise. It was believed until now that first stage of both ICBM like missiles – the HS-13 and HS-14 – is powered by a pair of rocket motors in tandem. Instead, the images from the flight test showed what could be a single rocket motor, with four small steering motors surrounding it. A similar arrangement was seen in a new, powerful rocket motor tested by North Korea last March. If true, this signifies another major departure from previous designs. Changing the propulsion system in a ballistic missile is a major operation. It requires significant modification of the missile structures and software. The result is, in many cases, tantamount to a new missile.

The biggest surprise is that this practically new missile with its revised dimensions, propulsion system, and flight characteristics succeeded in its first flight test. Missiles are notoriously finicky and tend to fail in their first few tests since debugging them completely can only be achieved by trial and error – hence the repeating flight test of operational missiles like the U.S. and Russia's ICBMs.  There is no guarantee that the ensuing test of the North Korean ICBM will also succeed, but success in the very first test usually signify a robust design. It seems that the North Korean engineers know what they are doing.

The new missile was transported to the launch pad by the giant eight axle "commercialized" MAZKT79211 vehicle, obtained (on false pretenses?) from China. Yet the missile took off from a detached flight table, with the launcher vehicle driven offsite. This is very similar to the method used to launch the smaller HS 12 last May, perhaps for the same reason: To assure the survival of the expensive, hard to replace vehicle in the case of the missile exploding upon lift off.

North Korea's first ICBM test, so dreaded in East Asia and the U.S., has now happened. What next?  Some analysts might trivialize the significance of the event by stressing the limits on that ICBM mobility, hence survivability, due to the tendency of its high energy propellants to boil or freeze within a narrow temperature range. Ostensibly, this should limit the movement of the missile in the open to very mild weather conditions  While technically correct, this limitation is practically irrelevant. The Iranians store their mobile missiles upon their launchers inside climate-controlled tunnels. All they need to do is to drive the loaded launcher from the tunnel to some open spot to fire the missile, spending no more time than necessary in the open. Chances are that this system was originally devised by the North Koreans. With all its temperature sensitivity it stands to reason that the new ICBM will be perfectly capable of spending a short period in the open, regardless of the weather, until it lifts off.

Some analysts will surely predict years of testing until the missile become reliable, hence dangerous. This comforting notion is derived from the practice of Western military establishments to accept new weapon systems only after they prove their reliability in rigorous and protracted testing. This is not necessarily the practice of non-Western armies. In the previous cases of the BK-1 and BK-2 solid propellant missiles, the North Korean accepted them for operational service after just two tests – a statistically insignificant number from reliability aspects. Where nuclear missiles are concerned, poor reliability is inconsequential. If "only" two nuclear warheads succeed to hit their targets while ten others fail, will the U.S. feel secure?

Judging by previous North Korean practices, another test of the revised HS-14 can be expected in the not too far future. Pending success, Kim Jong Un might consider his country fully nuclear capable against the U.S. and behave accordingly. It will be wise for the U.S., Japan, and ROK to shape their policy according to this tight schedule.

Image: A man walks past a TV broadcasting a news report on North Korea's the Hwasong-14 missile, a new intercontinental ballistic missile, which they said was successfully tested, at a railway station in Seoul, South Korea, July 4, 2017. REUTERS/Kim Hong-Ji​.