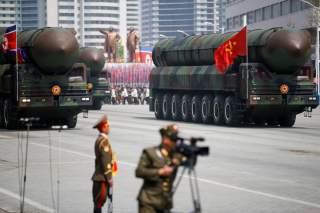 North Korea held a large military parade at 10 a.m. local time. The parade was subdued by comparison to past parades. In fact, it was not carried live on North Korean state television, but rebroadcast later. This meant that it happened in the dead of night here in the United States and is sure to be buried by the coverage of the Olympics opening in South Korea.

And yet, despite an obvious effort not to make headlines, the parade itself still contained some surprises, at least if you are, like me, interested in North Korea’s growing missile capabilities.

The parade was distinguished by what we did not see as much as it was by what rolled through Kim Il-sung square. There were five types of missiles displayed—all of which we had seen before. But what was missing? Well, for one thing, North Korea showed no Scud or Nodong missiles. These missiles have, historically, been the backbone of North Korea’s missile force and a staple of military parades. Instead, we saw what looks like an extended-range variant of North Korea’s Toksa short-range ballistic missile and launchers for the Pukguksong-2 medium-range ballistic missile.

These missiles are solid-fueled, which makes them easier for North Korea to operate. Liquid fuel is nasty and dangerous, and it imposes a number of operational constraints that can only be partially overcome. There is a reason that the vast majority of United States, Russian and Chinese missiles are solid-fueled. The message is that North Korea too is making that transition, and these these new generation missiles will come to replace the several hundred Scud and Nodong missiles that use liquid fuel.

The Toksa, which is a short-range ballistic missile, was again on display, although in a very new configuration. The truck carrying it now holds two missiles, rather than just one. And there are other changes, too. It’s possible this is something new, but for moment I am leaning toward it being an improved variant of the old missile, one with a longer range. Still, we’ll have to scrutinize this one closely over the coming days. The Pukguksong-2 was first seen in the parade last year—that now seems like a million years ago. Oddly, it counts as old news.

North Korea’s longer-range missiles still rely on liquid-fuel, at least for now. But there is a shift coming, sooner or later. That’s what the parade seems to suggest, anyway.

Again, what was interesting was what we did not see. The Musudan, KN-08 and KN-14 have all disappeared. These missiles used a rocket engine based on a finicky Soviet design, called the 4D10. A lot of experts doubted that any of these missiles could ever be made to work reliably. The new generation of missiles that North Korea tested last year—the Hwasong-12, -14 and -15—all used the new, far more reliable engine. The fact that none of the missiles using the old 4D10 made the big parade suggests these are technological dead ends destined for a museum, not the battlefield.

Other things we did not see: We did not see a launcher for Hwasong-14. These missiles were towed by semi-trucks. What does that mean? Last year we saw these same trucks towing a canister that could launch a missile. Does this mean the Hwasong-14 will be deployed in that canister? That’s not impossible, but normally canisters are reserved for solid-fueled missiles. This is a bit strange. Perhaps it means these missiles will deployed in some other fashion, such as rollout to launch sites, silos or even on rail cars? In that case, maybe Kim Jong-un just doesn’t feel like sharing. And, of course, you can’t parade a silo. Or maybe there just aren’t enough heavy trucks.

That idea is suggested by the small number of vehicles carrying the Hwasong-15, the big missile that can target anywhere in the United States. There were four of them in the parade, plus a fifth back-up. These trucks have nine axels but otherwise look exactly like a small number of eight-axel heavy trucks that North Korea imported from China and that caused such a fuss a few years ago. The North Koreans have claimed that they are now making their own versions of this vehicle, but the small number on display and the absence of the original Chinese vehicles raises the question of whether these are North Korean copies or just the same small number of trucks being modified. This is a huge question, because the number of trucks may be the last really important limit keeping the size of North Korea’s ICBM force small. There parade doesn’t provide any clarity on this question.

The parade leaves many questions unanswered, but it does suggest some important trends in North Korea’s missile programs, as older designs are phased out in favor of newer solid-fueled short- and medium-range ballistic missiles and longer-range liquid fueled missiles using the new March 18 engine. These missiles are all relatively new, having been tested only in the past few years. That suggests that, once the Olympics is over, testing is likely to resume and the long-running crisis between the United States and North Korea will be with us again.

Dr. Jeffrey Lewis is the Director of the East Asia Nonproliferation Program at the James Martin Center for Nonproliferation Studies at the Middlebury Institute of International Studies at Monterey and the founding publisher of Arms Control Wonk.com. His also a nonresident affiliate at Stanford’s Center for Security and International Cooperation and a Contributing Editor to Survival.

Image: Intercontinental ballistic missiles (ICBM) are driven past the stand with North Korean leader Kim Jong Un and other high ranking officials during a military parade marking the 105th birth anniversary of country's founding father Kim Il Sung, in Pyongyang April 15, 2017. The missiles themselves were shown for the first time inside a new kind of canister-based launcher on Saturday. The trucks upon which they are mounted are originally designed to move lumber. REUTERS/Damir Sagolj/File Photo​