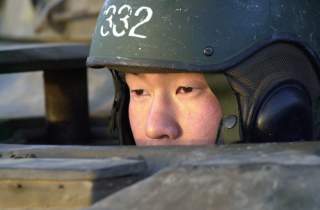 Russian state-run news agency Tass confirmed on April 22 that Kim Jong-un will be in Moscow for the May 9 Victory Day celebrations. The North Korean leader will be among 26 other heads of state that have so far confirmed their attendance.

This visit will mark Kim's first official foreign trip since he took over the leadership of North Korea in late 2011, and will mark a high point in the bilateral relationship in 2015, designated the “year of friendship with Russia” by North Korea.

Pyongyang's relations with Russia have regained momentum as its relationship with China started to deteriorate after Pyongyang's third nuclear test in February 2013. Until the Soviet Union's collapse, Moscow was North Korea's closest political ally and main trading partner. But since the end of the Cold War, China has become its main supplier of economic aid, prompting worries about over-dependence in a nation that officially strives for Juche, or “self-reliance.”

Meanwhile, North Korea's outbound trade to Russia reached US$10.17 million in 2014, up 31.9% from a year earlier. The gap between Russian and Chinese trade is still large, but these figures show the beginning of a change in relations between the Hermit Kingdom and its two powerful neighbors.

North Korea started seeking closer ties with Russia in order to balance China's influence at the same time Moscow decided that “looking east” would demonstrate its contempt for Western sanctions imposed after the annexation of Crimea.

The Kremlin's renewed interest in North Korea can also be explained by hopes that the Russian energy sector would benefit from Northeast Asia's crude oil and gas demands. In 2012, Russia decided to forgive 90% of North Korea's bilateral debt (US$10 billion) and said it would invest the remaining US$1 billion (to be paid back over 20 years) in North Korean infrastructure projects. A major natural gas pipeline would be built, running from the Russian Sakhalin Island fields through the Korean peninsula.

Seoul has taken an interest in this issue too. It has promoted South Korean firms' participation in the Rajin-Khasan railway linking the North Korean port city to Russia's Trans-Siberian railway. The ROK Government sees this project as being closely linked to President Park Geun-hye's “Eurasian Initiative,” first announced in October 2013 as a way to boost the regional economy by linking railways in China, Russia and both Koreas. A first test shipment of Russian bituminous coal was delivered to South Korea in November 2014 and a second one is expected to arrive in South Korea in early May.

In October 2014, Russia and North Korea also announced the creation of the Pobeda (Russian for “victory”) joint venture to refurbish North Korea's 3500km rail line between Jeadong and the port city of Nampo in exchange for access to coal and other minerals such as titanium, tantalum and gold.

According to the Nautilus Institute, North Korea is estimated to have 4.5 billion tons of reserves of anthracite, a form of coal with high carbon content and few impurities, widely used for high quality metallurgy. Exports to Russia might start before the end of this year. Over the course of 2014, North Korea shipped on average 1.2 million tons of coal a month to China, generating over US$1 billion revenue in 2014 and nearly US$5 billion since 2011.

Other bilateral cooperation includes 50,000 tons of Russian food aid, agreements with Russian Far East authorities to lease agricultural land to North Korean farmers and develop bilateral agricultural projects, building a bridge for car traffic across the Tumen River (currently, those seeking to enter North Korea from Russia by road must travel via China) and joint military drills with the North Korean People's Army.

Russia is not the only country North Korea has started wooing more actively, thanks to the diplomacy of North Korea's Foreign Minister, Ri Su-yong. In North Korea, the position of foreign minister is typically given to figureheads with no real power. But Ri, who, as Ambassador to Switzerland from 1987 to 2010 oversaw the Kim family's local assets and acted as Kim Jong-un's guardian during his school years in Berne, seems to break the mould.

In the past year, Ri has made 18 official foreign visits, starting with Algeria in May 2014.

Discussions about bilateral relations were held in Kuwait (which, according to an Asan Institute study, hosts the largest number of North Korean workers, after Russia and China), Gambia, Mozambique, Lebanon, Laos, Myanmar, Indonesia, Cuba and Belarus. Trade was also high on the agenda of meetings in Russia, Vietnam, Singapore, Syria (where Ri met with Bashar al-Assad in June 2014), Iran and, most recently, India.

In India, while questioning Ri Su-yong on transfers of nuclear and missile technology (without specifically mentioning Pakistan), Minister of External affairs Sushma Swaraj promised that food and educational aid to North Korea would be “considered positively” by the Modi Government. India has shipped oil to North Korea in the past and was second only to China as a destination for North Korean goods, especially silver.

For historical reasons, Russia comes as an obvious solution to counterbalance China's importance to North Korea's economy. But the list of countries visited by Ri Su-yong this year shows that North Korea is clearly making efforts to reach out to a larger array of countries as a way to increase trade.