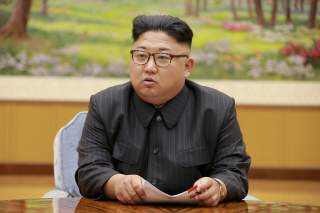 Hundreds of thousands of people are languishing away in brutal prison camps, many of which the North Korean regime denies even exist.

A Committee on Human Rights in North Korea (HRNK) report based on new satellite images reveals young North Korean dictator Kim Jong Un’s extensive network of camps for political prisoners and other individuals identified as enemies of the state. These facilities, where “forced labor with deliberate starvation, inadequate medical care and poor hygiene conditions cause the deaths of thousands of inmates annually,” are located across the country, according to David Hawk, a North Korea expert and the author of the report on the country’s prison system.

A 2014 United Nations Commission of Inquiry report concluded that 80,000 to 120,000 are being held in the four largest camps. In an earlier investigation, Amnesty International suggested that as many as 200,000 people could be suffering and dying in North Korea’s prison facilities. Tough physical labor, cruel interrogations, torture, and death have been reported at these camps.

The rogue regime has short- and long-term prisons, as well as political prison facilities, for a variety of different criminals. “Malnutrition and starvation due to below-subsistence food rations, arduous forced labor, brutal and inhumane conditions, large numbers of deaths, and innumerable crimes against humanity” are the defining characteristics of all of these prison camps, the HRNK report revealed.

Many political prisoners, individuals accused of engaging in alleged “anti-state activities,” are sentenced to life in prison, frequently with three generations of the person’s family in tow. North Koreans are often sent to prison for activities that would not be considered criminal in other countries, such as singing a South Korean pop song, as was the case with one former North Korean prisoner interviewed for the report.

Kaechon, one of the oldest known prison camps, is believed to be home to as many as 6,000 prisoners, who are forced to produce textile and leather products for the North Korean regime. The work is difficult and dangerous, especially given the toxicity of some of the chemical components and the destructive capabilities of some of the heavy machinery involved in the production process.

“Prison hygiene was reportedly appalling and food rations were inadequate, leading to high rates of death from malnutrition-related illness, particularly for those prisoners whose families did not or could not bring them food,” the HRNK report introduced. Former prisoners explained that “the brutal and arduous labor, grossly inadequate diet, and lack of medicine lead to a dreadfully large number of deaths in detention.”

The Department of State, relying on information from the United Nations Commission of Inquiry on Human Rights in North Korea, revealed the atrocities at several North Korea prison and concentration camps in August, noting that “induced starvation is common among prisoners, who are driven to catch and eat rodents, frogs, and snakes.” At one particular concentration camp, “large numbers of prisoners died of malnutrition, disease, and work accidents, and administrators ordered public executions for escape attempts.”

Defectors — including former guards and prisoners — have described the tragic and horrible details about the Hoeryong prison camp. Ahn Myong-chol, a former guard at the camp, “estimated that between 1,500 and 2,000 prisoners, mostly children, died annually of malnutrition during his years there.”

“Those who die are the lucky ones,” Lim Hye-jin, the first former female guard to speak openly about her experiences, introduced earlier this year. She described rape, torture, abuse, and public executions. In one instance, a guard set a woman on fire because she annoyed him. Lim revealed that once, when two brothers broke out of prison, the prison guards murdered seven of their family members on the spot, and numerous other prisoners were beaten severely. After they were recaptured, the two brothers were beheaded.

“The two brothers were beheaded in front of everyone,” she explained. “They called everyone to watch as a warning not to flee. The other prisoners then had to throw stones at them.”