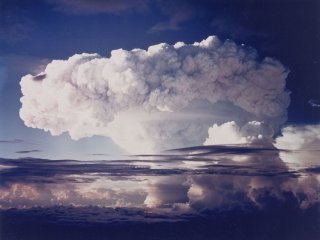 North Korea claims it has successfully tested a hydrogen (thermonuclear) bomb today. Seismic readings show there was a non-natural seismic event consistent with an explosion near Sungjibaegam, North Korea's nuclear test site. The seismic readings are of similar magnitude to those from North Korea's last nuclear test in February 2013. That test is thought to have had a yield equivalent to several thousand tons of TNT (say 7 kilotons; by comparison, the Hiroshima bomb had a yield of 16 kilotons).

At this stage it is not possible to confirm whether this was a thermonuclear explosion. It might be possible to confirm this by sophisticated seismic analysis, but more likely it will require analysis of atmospheric emissions, if there are any leaks from the test tunnel. Any emissions could take several days to detect and analyze. But no emissions were found from the 2013 test, so there is no certainty emissions will be found this time.

A thermonuclear weapon uses an 'atomic bomb' (a fission explosion, splitting plutonium or uranium atoms) as an 'initiator' to produce the high temperatures required for fusion of hydrogen atoms (typically deuterium and tritium) incorporated in the weapon assembly. As the hydrogen atoms fuse together they release enormous energy (explosive force and heat) and also neutrons, which results in more complete fissioning of the nuclear material in the initiator. Hence a thermonuclear weapon results in very high explosive yields (in the hundreds of kilotons, or even megatons, compared with a basic fission weapon which would usually be less than 50 kilotons).

Conducting nuclear tests is one thing. Producing compact and reliable warheads able to be fitted on missiles and to withstand the stresses of launch and re-entry is quite another. North Korea's nuclear tests raise the level of international tensions but the country has a long way to go to establish a credible nuclear weapon capability. There is still time for the international community to dissuade North Korea from proceeding further down this path.

John Carlson held the statutory position of Director General, Australian Safeguards and Non-Proliferation Office from 1989 to 2010. He was Chairman of SAGSI (IAEA’s Standing Advisory Group on Safeguards Implementation) from 2001 to 2006. He was a Member of the Advisory Board of the International Commission on Nuclear Non-Proliferation and Disarmament, which reported in 2009, and founding Chair of the Asia-Pacific Safeguards Network, 2009-12. This article first appeared on the Interpreter.