North Korea’s Tunnel Network Is Impressive (But Not Invulnerable) 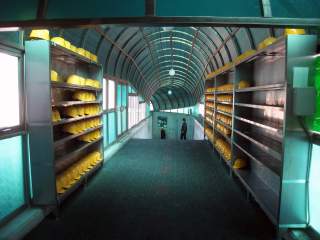 A recent article described a newly noted but apparently abandoned railroad tunnel in North Korea, located near Dancheon on the east coast roughly midway between Hamhung and Chongjin. It could be used for raising mushrooms (yes, seriously), document storage or military use – nobody really knows.

The lack of information regarding military usage cries out for discussion, for North Korea has used tunnels and other underground structures for a multitude of military and civil-defense purposes for decades.

Discoveries beginning in the 1970s showed that North Korea had dug at least four infiltration tunnels into South Korean territory from its side of the Demilitarized Zone (DMZ) that splits the North from the South. The tunnels are tall and wide enough to accommodate moving great numbers of personnel – even small vehicles – and are thought to be stealth invasion routes for surprise attacks on the South. There may be as many as 20 such, so far undetected.

Moreover, in 2004 Pyongyang ordered the construction of between 800 and 1,200 underground bunkers for troop concentrations near the DMZ. According to defector reports, these underground storage sites are said to contain enough gear to equip 1,500 to 2,000 soldiers. Even though some of the bunkers were intended to be decoys, the total number remains unknown.

North Korea has a long history of using earth to conceal its weaponry. It has a massive artillery arm, with as many as 12,000 tubes and 2,300 multiple rocket launchers. Many are dug into the rear slopes of hills and mountains just north of the DMZ. In addition to being difficult to detect, those positions avoid direct line of fire; the pieces are rolled out of their positions only to fire.

Caves have also been used as revetments for North Korean aircraft since the Korean War. It built revetments for some of its aircraft into the sides of mountains, and three runways exiting from mountains have been built – one of them through a mountain.

Yet the utility of such runways or underground hangars is questionable. With North Korea’s conventional runways expected to be quickly incapacitated in any air war, so too would be the portals to any mountain runways or underground facilities. The runways leading to and from such openings would invite targeting, as would the portals: Strikes above them would trap the assets inside with a landfall of rubble.

Even Pyongyang itself leverages underground protection. At 110 meters deep, its subway system is far deeper than it needs be. There can be little doubt that it is intended to serve as shelter from any attack by South Korea or its allies – including a nuclear blast.

To fuel or not to fuel – a solid question

With North Korea’s strategic missile force now a – perhaps the – key arm in its military, tunnels have found another highly significant use. Road-mobile missile transporter erector launchers (TELs), offer North Korea the ability to deploy its intercontinental ballistic missiles (ICBMs) from point A to point B quickly, while tunnels mean they can be stored safely out of sight.

However, liquid-fueled ICBMs are inconvenient to deploy. The fuel is unstable and highly corrosive, hence the weapons cannot be stored in a fueled state. Consequently, motors using this type of propellant are stored “empty” and must be fueled before launch. This requires support vehicles to service the missile tanks with both fuel and oxidizer. This fueling process takes time, which delays activation – and reduces these missiles’ immediacy as retaliatory weapons.

Conversely, solid-fueled motors require no fuel trucks, meaning such missiles can be positioned with much less regard for logistics. Solid-fuel missiles are also cheaper to build and maintain since there are no intricate fuel lines and control valves to deal with.

However, solid-fueled motors have only two states: fully on or fully off. That is, once ignited, the burn rate cannot be altered or turned off. Fuel is consumed until exhausted. Molding the fuel into the combustion chambers of the missile requires skill, and missiles developed early in the switch to solid fuels often suffer catastrophic failures such as uneven burns and explosions.

Once mastered, though, solid-fueled missiles are clearly superior: They need far less logistical attention and they can be stored where liquid-fueled missiles cannot – for example, aboard submarines. Liquid fuel components are too dangerous to store on board, and access to missile launch canisters for fueling is impossible anyway. Solid-fueled ICBMs can be more or less permanently stationed in tunnels or caves away from obvious logistical supply points.

This is Pyongyang’s motivation for solid-fueled missiles. It was recently reported that North Korea was indeed working on solid-fuel motors, a major advancement in missile technology and a huge improvement in it’s readiness posture. Movement to and from missile sites would be greatly reduced and, once hidden in tunnels, the missiles would be much more difficult – but not impossible – to detect.

To discover tunnels in use by missiles, the US would use satellites to monitor roads capable of handling TELs, while looking for supporting utilities such as electrical lines to sites. (Though one alternative to external electrical-power sources would be a generator needing only infrequent refueling.) Construction, during which debris piles would be noted, and other nearby activity would garner further scrutiny by satellite.

The digging of tunnels, improvements to existing ones and the building of supporting infrastructure are all detectable. Roads capable of conveying TELs, and related road usage, can be monitored.

Clearly any anti-North Korea missile mission undertaken would be immense, and tunnels greatly complicate the task. But it is not impossible: The resources to meet this challenge exist. Washington and its allies must optimize their assets – orbital and terrestrial – to counter the threat from Pyongyang.