Northrop Grumman vs. Boeing: Who Will Build the U.S. Military's New ICBMs? 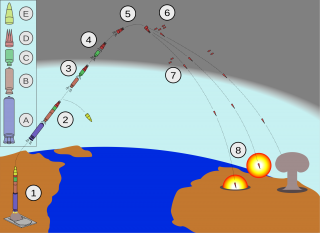 The United States Air Force has whittled down the number of would be contractors for its Ground Based Strategic Deterrent (GBSD) intercontinental ballistic missile (ICBM) to two. Northrop Grumman and Boeing will move forward into the Technology Maturation and Risk Reduction (TMRR) phase.

As such, the Air Force has awarded Northrop Grumman a $329 million contract and Boeing a $349 million contract for the TMRR phase. Under the contracts, the two companies will mature the GBSD technology and develop a “low technical risk, affordable total system replacement of Minuteman III” ICBM.

"We are moving forward with modernization of the ground-based leg of the nuclear triad," Air Force secretary Heather Wilson said.

"Our missiles were built in the 1970s. Things just wear out, and it becomes more expensive to maintain them than to replace them. We need to cost-effectively modernize."

The TMRR contract will run approximately 36 months—or three years–until Aug. 20, 2020. After the TMRR phase, the Air Force expects to receive the Pentagon’s approval for a “Milestone B” entry into the Engineering and Manufacturing Development (EMD) phase. The Air Force will only pick one contract for the EMD contract in late fiscal year 2020.

The Air Force Nuclear Weapons Center wants to develop an “integrated” GBSD weapons system. That would include both the launch and command-and-control segments. Unlike previous ICBMs, the Air Force wants to develop a modular systems architecture, which should “encourage continued competition across the lifecycle of the program.” Modular systems would allow the GBSD to adapt to technological changes and new threat environments over the course of its service life.

Northrop expressed its delight at being selected for the GBSD program given its long history of working on ICBMs.

“We look forward to the opportunity to provide the nation with a modern strategic deterrent system that is secure, resilient and affordable,” Wes Bush, Northop Grumman’s chief executive officer, said.

“As a trusted partner and technical integrator for the Air Force’s ICBM systems for more than 60 years, we are proud to continue our work to protect and defend our nation through its strategic deterrent capabilities.”

Boeing, too, expressed its satisfaction with its selection for the GBSD program.

“The U.S. Air Force has notified Boeing that we have been selected as one of two companies to receive a Ground Based Strategic Deterrent (GBSD) Technology Maturation and Risk Reduction (TMRR) contract,” Boeing spokesman Jerry Drelling told The National Interest.

“The Air Force’s decision reflects confidence in our design solution, experience, expertise and innovative approach. We are honored to continue our long-standing partnership with the Air Force to provide an affordable, low-risk intercontinental ballistic missile (ICBM) system solution.”

Boeing’s GBSD concept will put the Air Force on track to field a new ICBM in the next decade, an ICBM with unmatched strategic deterrence capability.  We are ready to start executing on the TMRR contract as we continue to sustain the Minuteman III ICBM systems to ensure their reliability for the next decade.”

Lockheed Martin, which builds the Navy’s Trident II D5 submarine-launched ballistic missile, expressed its dismay at being dropped from the GBSD contest.

“We are disappointed with the outcome of the Ground Based Strategic Deterrent competition, and we look forward to a debrief about the selection with the Air Force,” Lockheed Martin spokesperson Sydney Owens told The National Interest.

“We are confident our proposal delivered an affordable GBSD solution that meets all mission requirements. We remain fully committed to supporting the Air Force on our existing strategic deterrence programs.”

As part of the U.S. strategic nuclear triad, the Air Force’s ICBM force is vital to the nation’s defenses. The United States’ 400 silo-based ICBM are not only the most responsive leg of the triad, the weapons also serve to soak up enemy warheads during an incoming nuclear first strike. It takes two precise hits with a nuclear warhead to eliminate each silo.

"As others have stated, the only thing more expensive than deterrence is fighting a war. The Minuteman III is 45 years old. It is time to upgrade."