Note to the GOP Foreign-Policy Elite: Swallow Your Pride and Rally Around Trump 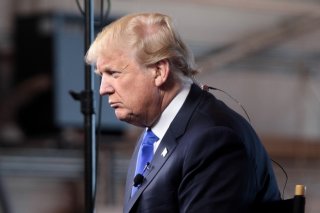 Two months ago over 120 of the most accomplished Republican foreign policy experts signed an open letter penned by Professor Eliot Cohen. It was an unfiltered condemnation of Donald Trump and his campaign, and concludes with a pledge:

Therefore, as committed and loyal Republicans, we are unable to support a Party ticket with Mr. Trump at its head. We commit ourselves to working energetically to prevent the election of someone so utterly unfitted to the office.

There are some daunting names on that letter; Washington heavyweights who have shaped world events and whose impressive writings have materially advanced our understanding of strategy, conflict, diplomacy, history, and international affairs.

And yet this intervention, like so many others, failed to impact the primary race. Trump is now the presumptive nominee, and in another six months he could very well be President-elect of the United States. Many of these signatories have a lot to offer a future White House administration. The time has come for these legends to reconcile themselves with the Republican Party and support their nominee.

Reports suggest the Trump camp has extended an olive branch to the aggrieved, with senior Trump adviser Paul Manafort personally appealing to their sense of patriotism to join the campaign. Manafort's success in this regard appears mixed. As soon as Cruz dropped out Cohen published another article calling for a third-party run. Other foreign policy experts continue to denounce Trump and refuse to give their support.

This is a mistake. Aside from the fact that I profoundly disagree with their interpretation of Trump and his foreign policy (see 'Donald Trump, A Nixon-Kissinger Realist') , the only thing continued obstruction will achieve is self-inflicted obscurity.

Many Republicans say they cannot support Trump because one characteristic or other 'disqualifies' him from the presidency. Reality check: it doesn't. In a democracy, what qualifies a person for elected office is the votes cast in their favor. Each voter makes a personal judgement about a candidate's fitness for office, and elections reflect that collective will. There are no set personal qualities that define, or are pre-requisites for, the presidency. The many eccentric personalities who have occupied the White House over successive generations decisively attest to that point.

Whatever one's individual feelings, it must be acknowledged that Donald Trump has made history. With no political experience whatsoever Trump single-handedly upended the whole political landscape. He re-invigorated popular interest in democracy, won more votes than any other candidate in Republican primary history, and did it all on a fiscal shoestring.

Donald Trump is shaping America and the world, but it's not just about him. Trump has given voice to the discontent of the majority against an unaccountable and increasingly disconnected elite. It's not Trump's lack of humility that is issue here, but the egos his achievements have offended.

Recently Trump delivered a major foreign policy speech hosted by the Center for the National Interest. He laid out a realist platform: be unafraid of bold reform where a changing global environment demands it; ensure scarce resources support a cohesive strategy; and exercise sober reflection with respect to past failures in order to avoid their repetition.

Some reflexively (and quite unreasonably) mocked it. Others referred to it as a "start but only a start" along some imagined path to being anointed with their own approval.

If someone feels they cannot serve a presidential nominee then that is absolutely their right. But they must understand that it is wholly unrealistic for a man vested by millions of people with the Republican nomination to come cap-in-hand to plead for support. Some will never be able to reconcile themselves with Trump as the nominee, but make no mistake, the vast majority will. Hours from now the Speaker of the House Paul Ryan will meet with Trump, and together they will begin the gradual process of unifying the Republican Party leading into the convention.

My message to these foreign policy thinkers is this: it's a privilege to serve, not a right. Trump is entitled to pursue his foreign policy agenda; the role of advisers is to help him achieve those goals.

Yes, many have put their names on a piece of paper, drafted within the context of a bruising primary. Now that the primary is over, if one is able to embrace Trump's vision then there is no shame in walking back from that pledge. To the contrary, there is moral failing in being overcome by pride, fear of embarrassment, or opprobrium. My message to all the signatories, including Professor Cohen himself, is: let it go.

After all, if you do not put yourselves forward to support "a foreign policy that will endure for several generations", new cohorts will. The only 'isolationism' will be your own.