Now That Terrorists Are Getting Air Forces, What Do We Do? 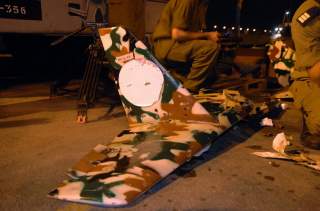 A new global arms race is heating up. It doesn’t involve nuclear weapons, advanced fighter aircraft, robotic tanks or long range missiles.  It is a race between terrorists weaponizing toy drones and the efforts by the world’s most technologically advanced militaries to deploy effective, low cost countermeasures.

Drones in the hands of groups such as the Islamic State (ISIS), Hezbollah and Hamas constitute the ultimate hybrid threat. For the first time in history, non-state terrorists and insurgencies have an air force. Hezbollah was the first to use drones to watch Israeli troop movements in the run up to the Second Lebanon War in 2006. Hamas employed a number of drones during the 2014 Gaza war. ISIS, for example, now routinely employs commercially available drones to perform many of the missions that the United States military does with large, sophisticated and expensive aircraft:  intelligence surveillance, and reconnaissance (ISR), targeting for indirect fire systems, weapons delivery and information operations. ISIS is reported to use drones to help direct vehicle-borne improvised explosive device attacks.

Drones also provide these groups with a precision strike capability beyond direct line of sight.  Equipped with GPS guidance systems and command guidance employing sophisticated electro-optical sensors, modern drones allow their users to fly to a designated area and then home in on a target. Currently available drones can only carry ounces or a few pounds of explosives, but this is enough to kill high-value individuals, military vehicles, aircraft and helicopters on the ground, command and control centers and even critical infrastructure.

Another advantage for the terrorists is that they can rely on a global toy store logistics network to provide them with drones; about 700,000 were sold last year in the United States alone. GPS-guidance systems and electro-optical sensors that allow the drone operator to precisely pilot the device are almost as readily available. A mass attack capability could easily be built in an average garage.

Of course, small, commercial drones are only one aspect of this new air threat. Many countries are acquiring or even developing more sophisticated military drones. Russian forces in eastern Ukraine have successfully teamed up medium altitude targeting drones with artillery units to create a massed precision fires capability.  It is not hard to imagine a future combat air environment filled with drones of various sizes and capabilities.

Developing cost effective counters to small, simple and cheap drones is harder than you might think, because the challenge is complex. In order to provide defenses of both fixed locations and mobile forces, the solution set has to involve an integrated suite of sensors and countermeasures that are simple, mobile, and cost effective. Launching missiles that cost tens or even hundreds of thousands of dollars at drones that might cost a couple of hundred dollars is a losing game. The current solution, assuming these small threats can even be seen and tracked, is to shoot them down with an extremely expensive fighter aircraft or surface-to-air missile. Defenders first have to detect, track and fix the threat and then rapidly deploy an effective countermeasure. Because these drones fly extremely low, the military would need to proliferate sensors as well as weapons. Doing so with standard radar detection systems is prohibitively expensive. There are a lot of ideas out there for countering the small drone threat, ranging from trained raptors, to snipers, net firing guns, and electronic jamming devices.

The Department of Defense has ramped up its efforts in recent months to test alternative solutions. The U.S. Army’s Rapid Equipping Force (REF) and the Asymmetric Warfare Group (AWG) have teamed up with other federal agencies to conduct a series of experiments involving various potential counter drone systems. The Joint Improvised Threat Defeat Organization, JIDO (formerly JIDA and before that JIEDDO), has made countering the drone threat one of its primary missions.  In response to an urgent request from combatant commanders, JIDO is looking to identify a near-term solution and has asked Congress for additional money to swiftly field a capability.

While there are lots of potential solutions for different aspects of the counter-drone mission, there are few that meet all the requirements. One of these is the lightweight Manportable Aerial Radar System (MARS-K), which can detect extremely low-flying aerial vehicles, including small drones. The version I saw being tested last year by the Pentagon’s Combating Terrorism Technical Support Office (CTTSO) for the Customs and Border Patrol could detect extremely small drones even when they were merely hovering. The upgraded system includes an electro-optical tracker to refine target identification. Carried in a couple of backpacks, MARS-K can be deployed virtually anywhere, at a military facility, with forward deployed troops and even on vehicles, providing an on-the-move detection and defense capability. Unlike virtually any of the alternatives, the MARS-K is reported to have an integrated electronic warfare (EW) capability to defeat drones. This means the system is immediately deployable to protect U.S. forward deployed forces.

It is possible to integrate a system such as MARS-K with other drone defeat capabilities as needed. For example, a low power tactical laser system could supplement the MARS-K EW capabilities, in some circumstances, to ensure defeat of larger drones operating at greater distances. The extremely low cost per shot of an EW and/or laser capability is exactly what is needed to bend the cost curve in favor of the drone defenders.

The global proliferation of small commercial drones is occurring at a pace on a scale not seen since the advent of the smart phone. Frankly, the threat is moving ahead at a pace which the traditional Pentagon acquisition system simply cannot match. The answer is to turn the problem over to those DoD organizations created for the purpose of rapid fielding of innovative capabilities – the Rapid Equipping Force, Asymmetric Warfare Group and Joint Improvised Threat Defeat Organization.