Nuclear Force Modernization Costs Much Less Than You Think 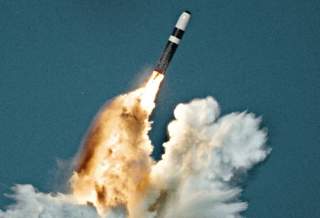 The U.S. government is embarking on the biggest surge in nuclear weapons spending since early Cold War years.  Pursuant to the findings of a Nuclear Posture Review released in 2010, the Department of Defense will replace all of the long-range missiles and ballistic-missile submarines in the nuclear "triad," plus most of the bombers.  Working with the Department of Energy, it will also refurbish and modernize many of the 4,500 nuclear warheads in the active stockpile; strengthen nuclear command links; and replace aging F-16 fighters used to deliver non-strategic nuclear weapons with the more survivable F-35 joint strike fighter.

Nuclear force modernization is expensive.  Robert Scher, the Assistant Secretary of Defense for Strategy, Plans & Capabilities pegged the cost at $350-450 billion over 20 years in testimony earlier this month before the strategic forces subcommittee of the House Armed Services Committee.  And that only covers the cost of buying new weapons, not the expense of sustaining the nuclear deterrent or upgrading aging warheads (the U.S. doesn't build new nuclear warheads anymore).  So some critics are looking for ways of cutting the bill, for example by canceling the long-overdue replacement of cruise missiles carried on strategic bombers.

However, if we place the cost of modernizing nuclear forces in a proper budgetary context, it is a surprisingly small amount to pay for averting the worst kind of conflict that mankind has ever devised -- a conflict that might spell the end of American democracy.  As Admiral C. D. Haney, head of U.S. Strategic Command, observed in his own testimony before the strategic forces subcommittee, sustainment of the current nuclear arsenal only requires about 3% of defense appropriations each year, and adding the cost of executing comprehensive force modernization on top of that would roughly double the share of defense appropriations spent on nuclear forces — to 5-7%.

The Pentagon spends more money dealing with threats that are much less important.  More to the point, the burden that nuclear force modernization would impose on the federal budget in the years ahead is quite modest.  How modest?  If we take the high end of the cost estimate offered by Secretary Scher, $450 billion over 20 years, that averages out to $22.5 billion per year -- two days of federal spending annually at current rates.  In the context of a $4 trillion annual budget that the Congressional Budget Office projects will rise to $6.5 trillion midway through the 20-year period, nuclear force modernization does not qualify as a major category of expenditure.

Relative to the size of the national economy, the cost of nuclear force modernization wouldn't be much bigger than a rounding error.  The Congressional Budget Office projects that ten years from now, halfway through the 20-year period in question, the U.S. gross domestic product will be $27.7 trillion, which means an average annual expenditure of $22.5 billion would represent about one-tenth of one-percent of economic output.  CBO calculates that in 2036, at the end of the 20-year period, gross domestic product will exceed $43 trillion, making nuclear force modernization a miniscule fraction of economic activity.

Of course, what really matters in political terms is the burden that programs impose on individual Americans, meaning voters.  The Census Bureau projects that the population of the U.S. will rise from today's 324 million souls to about 350 million ten years from now, at the midyear in the 20-year spending period.  Taking the high end of the modernization cost estimate — $22.5 billion annually -- and dividing it by 350 million people reveals that the average annual burden of nuclear force modernization on each American will be $64.  That certainly sounds like a manageable bill for the benefit of avoiding nuclear war.

The modest scale of the burden becomes more apparent when one considers the other ways in which Americans spend their money.  For instance, $22.5 billion is less than a quarter of what Americans spend on beer each year.  It's less than a third of what they spend on cigarettes, or lottery tickets.  Of course, the total carrying cost of nuclear deterrence would be higher for a few years because the existing force would have to be sustained at the same time a new generation of weapons was being built.  Nonetheless, an average citizen could cover his or her share of the cost for keeping the nuclear force safe and effective by skipping a couple of dinners at the Olive Garden each year.  Or maybe a latte at Starbucks every other week.

The point here is not to make light of the price-tag associated with nuclear modernization.  You could fix a lot of civil infrastructure for $450 billion.  But the whole economy could be collapsed in an afternoon by nuclear war, and there is no way of knowing whether it would ever recover.  America as on ongoing proposition might be done for.  So it really is crucial to start fielding a new class of ballistic-missile subs before the current Ohio-class boats begin retiring in 2029, and a new class of intercontinental ballistic missiles before Minuteman III missiles begin retiring not long after.  These systems have successfully deterred nuclear aggression for decades, but they won't last forever.

The good news is that nuclear force modernization can be had for a small, small fraction of the federal budget — if Washington can just keep its priorities straight.

Image: US Navy via Wikimedia