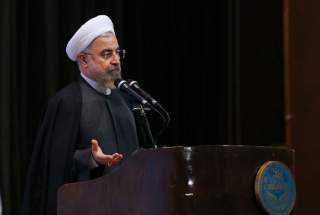 Policy makers tasked with cutting a deal with Iran over its nuclear program by the November deadline may find a set of useful lessons from the French nuclear-weapons program. Scott Sagan points out that France was largely motivated to pursue the bomb to restore the grandeur it lost during the Second World War. For de Gaulle and his predecessors, the bomb was an important symbol of French independence; after France lost Algeria, it demonstrated that France was still a great power. A similar dynamic may be at play with Iran over its demands concerning the right to engage in the enrichment of uranium.

When it comes to proliferation, many scholars and policy makers have largely ignored the possibility that status, rather than insecurity, is a primary motivation driving the behavior of states seeking to cross the nuclear Rubicon. Status refers to “an attribute of an individual or social role relating to rank.” States that are content with their standing in world politics are unlikely to pose problems for the prevailing international order. The states that pose a challenge are the ones that are dissatisfied over their rank in the international hierarchy. While these states may excel along one or more observable dimensions, from military prowess to economic strength to possessing a geographic sphere of influence, conflict is likely to ensue when the leading international powers refuse to recognize dissatisfied states’ claims to prestige. Conflict can come in the form of crises as well as war. Such conflicts are believed to resolve contests over status. The status dilemma resolves itself with either the leading powers granting a state’s status claims or the contestant backing down.

Many of Iran’s claims to enrichment appear to be driven by concerns over its status. In 2003, Iran agreed to a deal with the EU+3 whereby it would suspend the enrichment of uranium and sign the Additional Protocol to the NPT, allowing for more intrusive inspections. Mahmoud Ahmadinejad pointed to this agreement in the 2005 presidential elections as a humiliation for Iran. This issue is credited with having helped propel the then mayor of Tehran to the presidency. Throughout his tenure in office, Ahmadinejad continually reiterated Iran’s claims to having the right to enrich uranium under the NPT. Despite Ahmadinejad's current status as a political pariah, this is one part of his legacy that has managed to survive. Even though he was responsible for negotiating a deal with the EU+3 that involved the suspension of enrichment, President Hassan Rouhani, has reiterated some of the same claims to enrichment that his predecessor made. This suggests that concerns over status are alive and well within the Iranian body politic.

Western negotiators appear sensitive to Iran’s concerns over saving face. The United States has recently floated proposals that would recognize Iran’s right to enrich uranium while limiting its technical capacity to do so. Simultaneously, the Obama administration has also signaled that it may propose allowing Iran to keep 4,500 centrifuges in exchange for cuts in Iran’s fissile material stockpile. While Iranian negotiators have hinted that Tehran may be willing to reduce the number of centrifuges from the currently reported 9,400 to 7,000, other hurdles remain. Iran has insisted that multilateral UN sanctions be removed at the front end of a nuclear deal, rather than being removed piecemeal while the Islamic Republic demonstrates it is in compliance with any deal with the P5+1.

While the possibility of reaching a comprehensive nuclear deal with Iran by the end of November remains in doubt, there are a few options for satisfying Tehran’s demands for status and prestige while preventing breakout. The United States and other members of the P5+1 should tie prestige to states’ non-nuclear status. One issue that is of importance to Iran is the Persian Gulf naming dispute. Several Arab states along with some branches of the U.S. military refer to the body of water as the Arabian Sea, while international organizations, such as the UN, use the term Persian Gulf. The United States and the P5+1 could tie official recognition of the body of water as the Persian Gulf to Iran’s non-nuclear status. A second way is to lower the prestige of nuclear weapons. One way to do this is to allow for the limited expansion of the UN Security Council but make denuclearization a condition for permanent membership. Seyyed Hossein Mousavian and his colleagues at Princeton proposed a third idea that has failed to gain traction, but may be worth revisiting. This involved reducing the number of Iran’s older centrifuges in exchange for a smaller number of newer, more sophisticated centrifuges along with the construction of a multilateral enrichment facility.

Cooperation with Iran under the status dilemma may not be possible before the late November deadline, compelling the P5+1 to visit other options. These options start with pursuing another extension of the talks after November. This may prove to be difficult, if not impossible, if the Iranians are seen as intransigent and the Obama administration suffers huge losses in the upcoming midterm elections. In the United States, Congressional action is necessary for sanctions relief to take place; pushing through such legislation would be difficult with the current Congress and would be nearly impossible if the Democrats lost control of the U.S. Senate. If a deal were cut with the Iranians after the November elections, President Obama could suspend enforcement of sanctions legislation. However, there would be no guarantee his successor would do the same.

A second option would be to abandon the Joint Plan of Action (JPOA) and put the sanctions that had been removed last year back into place. Despite criticisms from hawks on the right, the announcement of the JPOA was greeted with a muted response by world oil markets and foreign investors, because it did not remove sanctions on Iran’s banks. Removing the first phase of sanctions relief may be fairly easy for the United States, because a “coalition of winners” benefiting from access to Iranian markets has not emerged.

A third option is for the United States and its allies to ratchet up the pressure on Iran. Iran’s economy is still in shambles and the country is continuing to suffer from a drought, both of which have been brought on through gross mismanagement. Covert actions that diminish Iran’s already limited refining capacity would exacerbate its economic woes. However, some studies have shown that autocracies benefit from sanctions. They allow rulers to extend their grip on power by centralizing the distribution of wealth within a state.

A fourth option is to denuclearize Iran militarily through a series of Osirak-like strikes. This option does not seem to be feasible, because the governing regime is believed to have learned the lessons of Osirak and dispersed its nuclear sites throughout the country. Some, like Fordow, are heavily fortified and may be difficult to destroy. Foreign Imposed Regime Change (FIRC) may be a more effective means of disarming Iran than a set of limited strikes, but would be incredibly expensive given the costs of occupation. Furthermore, it would put the United States in the position of having to choose between continuing to pursue its fight against ISIS and Al Qaeda or dealing with the blowback from attacking Iran.

A fifth option is to learn to live with a nuclear Iran and focus on the threat posed by groups such as ISIS and Al Qaeda. While there is little doubt that Iran can be deterred, many fear that allowing Iran to cross the nuclear threshold could set off a cascade of reactive proliferation in the Middle East. Furthermore, it could exacerbate tensions within the nascent alliance the United States has put together against ISIS by giving the impression that Washington is favoring the leader of the “Shia crescent” over Sunni powers.

Albert B. Wolf is an Israel Institute Fellow with the Leonard Davis Institute for International Relations at The Hebrew University of Jerusalem.  He is currently writing a book examining the effectiveness of coercive diplomacy in curbing nuclear proliferation.