Nuclear Tipped Cruise Missiles are a Relic of the Past 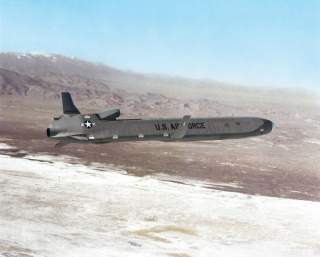 Earlier this week The New York Times reported that Hillary Clinton has confirmed what arms control experts have known for a very long time. Nuclear armed cruise missiles are antiquated relics of the past that should be retired.

But why wait until the next administration to make this common sense reduction to America’s nuclear posture? In the coming weeks President Obama will reportedly make a decision on whether or not to pursue additional cuts and shore up his credentials as a nuclear disarmer. Although several measures are on the table, perhaps none is more politically feasible, and would have a greater short-term impact than canceling the new cruise missile.

The new air-launched cruise missile, referred to by the Air Force as the long-range standoff weapon (LRSO) is a redundant and destabilizing weapons system that offers no clear strategic value. The current air-launched cruise missile (ALCM) was developed in the 1970s as a stop gap measure to protect vulnerable B-52 bombers from advances in anti-aircraft technology. Rather than take on enemy air defenses and risk being shot down, the non-stealthy B-52 could fire its nuclear cruise missiles from afar. When the stealth capable B-2 bomber came online in the late 1980s, the B-52 and its cruise missiles were supposed to be retired.

But history had other plans. In 1991 the Soviet Union collapsed, and the enemy that the B-2 bomber had been built to defeat ceased to exist. As a result the B-2 buy was reduced from 135 to 21 aircraft, far too few to replace the B-52 force on a one-for-one basis. It is through an accident of history, rather than by design, that the cruise missile and the B-52 remain with us today.

This mishap should be corrected when the ALCM comes to the end of its life expectancy in 2030. The successor to the B-2, the highly sophisticated B-21 stealth bomber, will start rolling off the assembly line in 2025, and the Air Force plans to purchase between 80-100 of them. Once they do, the B-52 will finally be retired. But rather than shelf the cruise missile for good, the Air Force wants to put a new, stealth capable cruise missile on its new stealth bomber to the tune of $30 billion.

Putting cruise missiles on stealth bombers is an unprecedented move. They are inherently competing platforms, not compliments to each other. This is a reality that the Air Force is well aware of. In 1968, Lieutenant General Glenn Kent, who was in charge of cruise missile development at the time, described the decision to develop cruise missiles as a “catch 22” for the Air Force. “People were afraid that if we went to Congress and said we wanted both the missile and the bomber, Congress would say, ‘O.K., here’s the missile but you can’t have the bomber.’”

In addition to incorporating stealth technology, early indicators suggest that the LRSO will include a supersonic engine with a greater range than its predecessor. It will also incorporate a dial-a-yield warhead whose explosive force can be adjusted anywhere in the range of 5 to 150 kilotons by the pilot. These enhancements, Frank Kendall, the Pentagon's top acquisition chief has said, are needed to provide the president with “uniquely flexible options in an extreme crisis, particularly the ability to signal intent and control escalation.”

The problem is that these added capabilities also lower the threshold for nuclear use. As U.S. Senator Dianne Feinstein recently observed, “the so-called improvements to this weapon seemed to be designed, candidly, to make it more usable, to help us fight and win a limited nuclear war.” With the LRSO in the American toolbox military planners would be more likely to recommend using the LRSO to “surgically” strike high-value military targets and convince adversaries to back down from head-on confrontation.

But any attempt by the United States to control escalation with low-yield nuclear weapons would likely spiral out of control and trigger a nuclear war. During the 1983 war game, Proud Prophet, that is precisely what happened. In an attempt to control escalation the United States launched a limited nuclear attack at the Soviet Union. The Soviet team interpreted the strike as an attack on their way of life and launched a massive retaliatory strike at the American homeland. The U.S. responded in kind, and when the dust settled half a billion people had been killed. According to historian Paul Bracken, “at least that many more would have died from radiation and starvation. NATO was gone. So was a good part of Europe, the United States and the Soviet Union. Major parts of the Northern Hemisphere would be uninhabitable for decades.”

These lessons have mostly been forgotten, and when they are remembered, they are selectively applied. Criticizing Russian nuclear doctrine that envisions an early first use of a nuclear weapon in a conflict, Deputy Secretary of Defense Robert Work noted that “anyone who thinks they can control escalation through the use of nuclear weapons is literally playing with fire. Escalation is escalation, and nuclear use would be the ultimate escalation.” Yet that is precisely the mission that the Air Force envisions for the new air-launched nuclear cruise missile.

Even former Secretary of Defense William J. Perry, who is known in military circles as “ALCM Bill” for his role in creating the current cruise missile has come out strongly opposed to the LRSO. Because cruise missiles can be launched without warning and come in conventional and nuclear variants, an enemy under attack has no way of knowing if he is facing a conventional our nuclear strike. That could cause a miscalculation that could launch a nuclear war.

That is the very reason that the United Kingdom decided to forgo sea launched nuclear cruise missiles three years ago. At the time, then British Defense Minister Philip Hammond wrote, “A cruise-based deterrent would carry significant risk of miscalculation and unintended escalation. At the point of firing, other states could have no way of knowing whether we had launched a conventional cruise missile or one with a nuclear warhead. Such uncertainty could risk triggering a nuclear war at a time of tension.”

Proceeding with a new nuclear air-launched cruise missile presents numerous risks and offers little payoff. Conversely, canceling the LRSO would save billions of dollars that could be reallocated to fund other top national security priorities. Secretary Clinton is absolutely right. The last thing we need right now is a sophisticated cruise missile that is nuclear armed. If the President wants to get serious about solidifying his legacy as a champion of nuclear disarmament, cancelling this dangerous and destabilizing program is an excellent place to start.