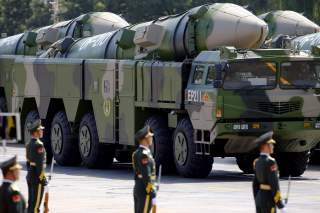 The People’s Republic of China is continuing its quest to develop a new class of hypersonic weapons that could strike at the continental United States in less than 15 minutes from launch.

An operational long-range hypersonic weapon is likely years away, but China, the United States, Russia and other states are in a race to field such weapons. In the meantime, China is working on building the world’s fastest hypersonic wind tunnel to help its scientist develop this new class of weapon. The new facility should become operational by 2020.

“It will boost the engineering application of hypersonic technology, mostly in military sectors, by duplicating the environment of extreme hypersonic flights, so problems can be discovered and solved on the ground,” Zhao Wei, a deputy director of the State Key Laboratory of High Temperature Gas Dynamics at the Chinese Academy of Sciences in Beijing, told the South China Morning Post.

Wind tunnel testing is an essential phase of aircraft and missile development before prototypes are built and tested in the real world. Thus, the new wind tunnel should greatly enhance China’s efforts to develop hypersonic aircraft, weapons and the requisite propulsion systems such as scramjets.

China has already tested hypersonic boost-glide vehicles in the past. Recently, as the SCMP report notes, China has already conducted seven successful test flights of a hypersonic glider called the WU-14—sometimes call the DF-ZF—at speeds of between Mach 5 and Mach 10. It is not clear, how close the new weapons is to entering operational service, but as Franz-Stefan Gady, a senior fellow at the East-West Institute and editor of The Diplomat points out, such a missile would be likely be impossible to intercept with current missile defense technology.

As such a long-range hypersonic weapon could afford Beijing another means of deterring the United States. Right now, Beijing, which does not have long-range strategic bombers, would have to resort to using its nuclear-tipped intercontinental ballistic missiles to retaliate against an American attack on the Chinese mainland. With only a small ICBM force, China’s assured retaliatory second strike capability could be threatened as the United States builds up its anti-ballistic missile defense—regardless of if the defenses work or not. Thus, a hypersonic glide weapon fitted with a nuclear warhead would afford Beijing another means of delivering an assured retaliatory strike.

The danger, of course, is that hypersonic weapons—like ICBMs—can be fitted with either a conventional or nuclear warhead(s). In the event of a conflict with China over, for example, Taiwan, the United States essentially assumes that it would be able to strike at the Chinese mainland with conventional weapons without Beijing striking back directly at the U.S. mainland. Right now, Beijing could only hit back with its nuclear-tipped ICBMs or with a cyber-attack since it has no other means to retaliate directly by conventional means.

A conventionally-armed hypersonic weapon could afford Beijing the ability to strike back directly at the U.S. mainland. However, unless there was some sort of agreement or understanding as is generally the case with ICBMs, there is no way for Washington to know that the incoming missiles are not nuclear-tipped. The United States maintains a “launch under attack” posture, which means Washington would launch a counter-strike before the missiles hit and it becomes apparent the Chinese weapons are conventional, leading to an unintended nuclear exchange. The same problem exists in reverse where China or Russia might mistake the Pentagon’s Conventional Prompt Global Strike weapon as for a nuclear missile.

Thus, hypersonic weapons could be a new destabilizing factor in the world of nuclear deterrence when these missiles make their operational debut. The United States, Russia and China should consider hammering out some sort of arms control agreement dealing with this new class of weapon sooner rather than later.