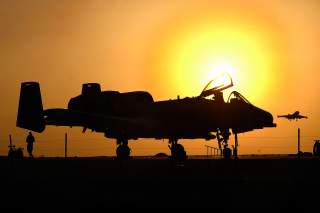 The United States Air Force is expected to hold demonstrations this summer to show off the capabilities of a new light attack aircraft the service might eventually purchase under a new OA-X program.

The Air Force had attempted to buy a light attack aircraft in 2008 under a previous iteration of the OA-X program, but ultimately that effort came to naught. The previous OA-X effort came at a time when the Air Force was fighting two counterinsurgency wars simultaneously in Iraq and Afghanistan, but political forces and bureaucratic inertia within the service carried the day. How this latest iteration of the OA-X will fare is an open question—but undoubtedly there are those within the Air Force who will vigorously fight the purchase of any new tactical aircraft that isn’t the Lockheed Martin F-35 Joint Strike Fighter.

Nonetheless, the Air Force is proceeding with its planned demonstration effort. The hope is that an operational OA-X would eventually free up more expensive fighter aircraft such as the Boeing F-15E Strike Eagle or F-35 Lightning II for missions against more challenging foes.

“We want to see if there’s a business case there,” acting Air Force Secretary Lisa Disbrow said during her speech at the Air Force Association’s Air Warfare Symposium.

“This concept could free up higher-cost, higher-performance platforms from doing low-threat missions, which would allow us time to prepare for more complex threats with those assets. It could also help us absorb new pilots and be useful as we work with allies and partners.”

But at its core, the Air Force is torn between investing in expensive high-end multirole combat aircraft or cheaper counterinsurgency (COIN) machines that might not be useful outside of certain specific situations.

“On the one hand, it wants to be seen as helpful in the current Afghanistan and anti-ISIS conflicts, but on the other hand it doesn’t want to make a big investment in a fleet of planes that would have absolutely no relevance outside the current Afghanistan and anti-ISIS conflicts.  COIN proponents tend to emphasize tactics over strategy; this is kind of the aeronautical equivalent of that tendency.”

Former Air Force B-52 pilot and airpower analyst Mark Gunzinger at the Center for Strategic and Budgetary Assessments said that this time around, the Air Force is likely serious about the OA-X. The service desperately needs more aircraft to provide more flying hours for its pilots and a low-cost OA-X could be just the answer the Air Force is looking for.

“The Air Force has been clear it is pursuing a light attack aircraft – perhaps more than a single variant over time – that could support counterinsurgency operations in permissive environments as well as increase the number of cockpits available to season pilots at an affordable cost per flying hour,” Gunzinger told The National Interest.

“I think the latter point is too quickly dismissed by some critics of this initiative. The Air Force has a pilot shortfall that is projected to grow to over 700 in the next couple of years. Moreover, while the Air Force’s Combat Air Force has shrunk to 55 fighter squadrons and a handful of bomber squadrons, there are other critical positions that require pilots such as joint staffs, operational planning staffs, etc. The Air Force is going to produce more pilots, but they will need cockpits for them – and a light attack aircraft with a two-pilot cockpit and a cost per flying hour of $4-5,000 could be a cost-effective alternative.  Add to that the availability of several off-the-shelf (or nearly so) aircraft; this becomes an option the Congress could fund that would have a near-immediate impact on the Air Force’s readiness.  There is also the potential for foreign military sales to allies and partners.  So, this said, I think the initiative has a good chance of succeeding.”

Col. Michael Pietrucha—one of the originators of the 2008 OA-X concept—wrote in War on the Rocks that the demand signal for airpower fighting counterinsurgency wars shows no sign of abating.

“We can no longer pretend that the demand for combat airpower in irregular conflicts will end soon,” Pietrucha wrote.

“The re-emergence of great power competition does not automatically translate into a reduction of irregular threats. Faced with a problem set that will not go away and a fighter/attack fleet that has been ridden hard and put away wet, it makes perfect sense to add combat capability quickly, and it is entirely reasonable that that airpower be designed for the conflicts we face today.  OA-X is intended to be an additive capability — not to replace any other element of the fighter/attack fleet.  The Air Force is not trading away its ability to fight a peer adversary, but it is making sure that the forces necessary for a modern theater war are ready for that fight by not frittering the lifespans of our advanced legacy fighters away on tasks that could be done as well for far less cost. The Air Force has done this before, and it has good reason to try again.”

Gunzinger agreed that the Air Force needs the OA-X. However—like Pietrucha—he noted that a light attack aircraft is not a substitute for a high-end warplane that can take on the most capable enemy threats such as Russia and China. “Of course, I do not see a light attack aircraft as a weapon system that should take the place of current and planned 5th gen and eventually 6th gen combat aircraft,” Gunzinger said.

Ultimately, only time will tell if the Air Force ends up buying the OA-X. Institutional forces within the service are strong, only determined leadership from the chief of staff, Gen. David Goldfein—and whomever the next secretary is—can push the OA-X through to fruition.