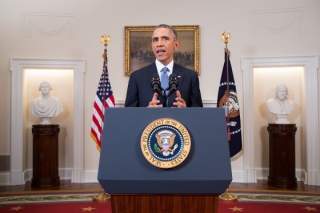 As a rule, President Obama has tended to make his foreign policies subservient to domestic political ends.  That is, as a leader primarily concerned with pushing through domestic reforms—healthcare, economic recovery, immigration—Obama generally takes care to limit his administration’s exposure to risky foreign endeavors.  To do otherwise would be to jeopardize success on the home front.  Viewed in this light, the president’s announcement of a rapprochement with Cuba stands out as an anomaly.  What explains the shift?

Obama always evinces a mindfulness of what the U.S. public and political system will withstand when it comes to foreign policy.  Like Bill Clinton before him, President Obama appears to be in line with public opinion—or, at least, reflexively distrustful of any sort of foreign policy behavior that would risk upsetting the domestic apple cart.  This sensibility was evident in Obama’s first-term decision to wind down the U.S. presence in Iraq against the advice of senior military advisers and in his parallel move to “surge” troop numbers in Afghanistan, for example.  It also informed Obama’s reluctance to sanction U.S. leadership in removing Libya’s Colonel Gaddafi (with the administration instead preferring to “lead from behind”) and his consistent opposition to broad involvement in the Syrian civil war.  The bottom line for President Obama has been that, while foreign policy catastrophes should be avoided, offering the least line of resistance to foreign threats usually is the best course of action.

The president’s opening to Cuba stands apart from this general pattern of statecraft.  It is difficult to divine the domestic political ends that will be served by the plans to ultimately normalize diplomatic relations with Havana.  To be sure, U.S. businesses will stand to benefit from any future investment opportunities in Cuba, but such interests have never succeeded in persuading former presidents to lift the embargo.  Average Americans might also be tempted by the prospect of visiting the Caribbean nation, yet there has been no groundswell of support for a rethink of U.S.-Cuba relations.  In fact, the groups that care most about U.S. policy towards Cuba—that is, groups representing Cuban exiles—can be counted upon to vocally oppose the move.  Nor will the policy do anything to improve President Obama’s relations with Congress, with lawmakers already lambasting the White House for once again using executive powers to institute sweeping changes in national policy.

Far from hewing to domestic opinion on the matter, then, pursuing rapprochement with Cuba might well end up hurting President Obama’s domestic standing.  So why has Obama seen fit to announce what he describes as “the most significant changes in our policy [towards Cuba] in more than fifty years”?  One explanation would be if there were pressing geopolitical reasons for reconciliation.  Yet whether Cuba is mollified or ignored makes little difference to the safety and security of the U.S. homeland.  Nor does a rapprochement with Cuba serve any broader geopolitical ends—as, for example, Obama’s earlier rapprochement with Myanmar clearly did (in that instance, as a way to tacitly balance against the rise of China).  Cuba is a small nation that lacks a superpower patron.  While Havana has much to gain from improved relations with the U.S., the relative gains for Washington, DC are hard to discern.

If not done in response to domestic or geopolitical exigencies, however, what might explain the decision to usher in a thawing of relations with Cuba?  Two factors stand out as chief culprits: opportunity and legacy.  First, the negotiations to release Alan Goss likely presented President Obama with a readily available and, presumably, well-exercised channel of communication with Havana that, one might reasonably assume, was not difficult to exploit in service of broader diplomatic ends.  Especially if it was the Cuban government that took the initiative in proposing a broad package of conciliatory reforms, it would have been easy for the administration to see (and difficult for it to reject) such a deal as low-hanging fruit, a diplomatic achievement to buffer criticism that Obama has presided over nothing but failures in terms of foreign policy.

This leads to the second factor.  As a second-term chief executive with few clear-cut achievements to show for his six years in office—whether in terms of foreign policy success or domestic political accolades—President Obama may well have concluded that rapprochement with Cuba was worth pursuing simply as “the right thing to do,” a prudent (if unpopular in some quarters) reversal of a decades’ old policy that has done nothing to produce tangible benefits either for the U.S. or for the Cuban people.  Obama might reasonably have concluded that a policy of openness towards Cuba will be judged favorably by historians as a long overdue chapter in the troubled story of U.S.-Cuban relations.  After all, it is almost axiomatic in the study of American politics that “anticipated future opinion” is perhaps the most important type of public opinion there is.

President Obama will incur some short-term domestic-political backlash over his opening to Cuba.  That much is clear.  But, merits of the policy aside, Obama arguably has acted like a true leader on this issue.  That is, he has made a far-reaching and wide-ranging foreign policy decision without any obvious deference to the domestic repercussions that he or his co-partisans will face, and has instead focused upon implementing what he views to be the most sensible and level-headed course of action for the country.  In this sense, Obama’s Cuban policy might be remembered as his first bona fide foreign policy: a decision made in blissful ignorance of the domestic political milieu above which it hovers.