Obama Goes From “No Boots” to Mission Creep in Syria 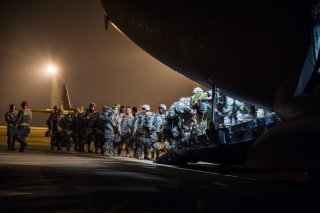 Yesterday, while being interviewed by Norah O’Donnell of CBS News, President Barack Obama made a revealing statement about the careful manner in which U.S. military interventions are made. O’Donnell asked Obama if he was going back on his word by authorizing an expansion of U.S. troops in Iraq and Syria with the deployment of what the Pentagon calls a “specialized expeditionary targeting force.” The president earnestly replied, “You know, when I said no boots on the ground, I think the American people understood generally that we’re not going to do an Iraq-style invasion of Iraq or Syria with battalions that are moving across the desert.”

It is difficult to imagine that the American people misinterpreted Obama’s pledge of “no boots on the ground,” which he only made publicly sixteen times between August 2013 and July 2015. Moreover, it is unclear how he knows how Americans interpret his pledges. However, the obvious reason that all presidents and senior administration officials initially downplay the mission and role of U.S. military interventions is to catalyze domestic political support. This is because opinion polling of Americans reveals that they overwhelmingly do not support wars that they believe will be unilateral, long, bloody, and costly.

Obama was simply following the precedent of his predecessors by first downplaying a U.S. military commitment, then incrementally increasing that commitment and approving new missions, all while consistently claiming that there has been absolutely no mission creep and no violation of previous pledges. Each gradual accretion of personnel, weapons and missions is announced in a “nothing new to see here” manner and packaged as a wise and minor policy adjustment that will bring the United States closer to achieving its strategic objective—in this case, to “degrade and ultimately destroy” the self-declared Islamic State.

When the first 275 U.S. troops were sent to Iraq in June 2014, Pentagon spokesperson Rear Adm. John Kirby pledged that the deployment “will be of a limited duration” and be “a discrete, measured, temporary arrangement to help us to get eyes on the ground, to figure out what’s going on and get a better sense of it.” Compare that to the latest deployment of two hundred special operations forces, which Secretary of Defense Ashton Carter described on Tuesday as “a force that will essentially do raids throughout the territory of Syria,” and  is intended “to make ISIL wonder…when they go to bed at night who’s going to be coming in the window?” A puzzling mission set where Navy SEALS are supposed to serve as nightmare fuel for jihadists.

Consider that in November 2014 Obama pledged that the sort of circumstance where U.S. troops might be deployed on the ground were, “If we discovered that ISIL had gotten possession of a nuclear weapon, and we had to run an operation to get it out of their hands.” Now “specialized” troops will conduct high risk operations to simply attempt to capture and kill a few more Islamic State members, of which there is apparently an inexhaustible supply. On Monday, an anonymous Pentagon official claimed that an estimated 23,000 Islamic State fighters have been killed in 8,600 U.S.-led coalition airstrikes over the past sixteen months. The following day, Secretary Carter was asked, “how many ISIL forces are there in Iraq and Syria?” He replied: “estimates in the neighborhood of 30,000.” That is the exact same estimate for the Islamic State’s size that the U.S. intelligence community provided sixteen months ago. Is this strategy working?

Micah Zenko is a senior fellow in the Center for Preventive Action (CPA) at the Council on Foreign Relations (CFR).