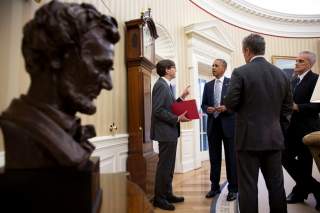 Barack Obama has struggled to avoid his presidency being defined by foreign policy.  Events have not been kind to this ambition.  Now, as the United States finally prepares to ramp up its military campaign against the ISIS threat in Iraq and Syria, last night’s speech can be understood as a calculated attempt to control the way in which the president’s entire handling of foreign policy is perceived by the American people.

Since entering the White House, President Obama has walked a tightrope between needing to address emerging threats to U.S. and global security while still appearing to keep to his campaign-era promises of curtailing America’s overseas commitments.  The truth is that Obama would like foreign policy to be kept off the political agenda altogether, preferring instead to focus on the very real challenges that face the country in terms of its domestic politics, society and economy.  Yet no president can ignore major foreign policy crises altogether.

The pervasive fear that America will be “dragged into” something resembling a rekindled war effort in Iraq—Obama’s bête noire during the 2008 campaign—has been particularly anathema to the president’s agenda of focusing on the domestic side.  The challenge posed by the Islamic State, then, has been one of selecting an appropriate response and of packaging that response for domestic consumption.  What is the correct mix of resolve and restraint?  Can ISIS be defeated without upending Obama’s six-year battle to steer the U.S. away from costly foreign entanglements.  Last night, Obama revealed his long-awaited formula for action.

Essentially, Obama’s answer is to characterize his strategy for dealing with ISIS as part and parcel of a longstanding and successful counter-terrorism effort.  This will not be a new war or even an entirely new mission.  Obama began by invoking his administration’s killing of Osama Bin Laden, the most celebrated scalp of what used to be known as the Global War on Terror.  The effort against ISIS, the president reassured his audience, will be a stable-mate of that successful campaign against America’s most hated enemy—something Americans can have faith in and get behind—and will not resemble the “dumb war” against Saddam’s Iraq that many fear a repeat of.

Obama believes that counter-terrorism is his foreign policy strong suit.  Implicitly, perhaps, the president sought to contrast his boldness at “taking the fight” to terrorists over the past six years with his predecessor’s folly in invading Iraq.  Although he has overhauled the rhetoric surrounding it, Obama has always favored prioritizing the war on terror when it comes to foreign policy.  Keeping to form, Obama last night was careful to stress the threat posed by ISIS to the U.S. homeland and trumpeted his administration’s controversial policy of using targeted airstrikes (including drone attacks) in places such as Yemen and Somalia as the sort of tactics that would be used to “degrade and ultimately destroy” ISIS.  In short, Obama offered his audience a theme of continuity and reassurance, not dramatic change or knee-jerk reaction.

The president knows that his Achilles heel would be the accusation that he is allowing the country to slide towards another major conventional war.  Being painted as pouring more U.S. troops into overseas combat zones would be fatal to Obama’s image as a president who prioritizes “national building here at home” over the kind of unpopular foreign wars that allowed him to get elected in the first place.  The president’s specific proposals for dealing with ISIS were thus laden with language aimed at neutralizing this concern: the U.S. will launch airstrikes, not ground offensives; ground troops will shrink from combat roles and will not be “dragged into” a ground war; ISIS will be deprived of oxygen through other remote mechanisms.

Still, Obama knows that any sustained military effort against ISIS—however qualified and no matter how large the international coalition—will provide fodder to his critics.  Hawks will accuse the president of “too little too late” while others will charge him with abandoning the pledge to reduce overseas commitments.  It remains to be seen whether Obama’s conspicuous attempt to rally Americans’ optimism about their country’s future—both at home and on the world stage—will be enough to shield him from such flak.  His insistence that “Americans are united in confronting” the Islamic State was surely as much wishful thinking as it was a rhetorical attempt to engineer broad support for his policies.

Obama has been forced to act against ISIS against his best laid plans.  For years, he sought to limit U.S. involvement in Syria, desperate to avoid becoming embroiled in that complex and bloody conflagration.  His desire to pull out of Iraq is well worn.  With the security situation in the region reaching boiling point, however, the president has had no option but to respond.  His solution has been to grasp for what he believes to be his foreign policy strong suit—the narrative of counter-terrorism and using targeted military strikes to protect the American people from harm.

There is a difference, though, between the past six years of counter-terrorism under Obama and the impending campaign against ISIS: whereas previous actions against terrorist groups in Yemen, Somalia, Afghanistan, Pakistan and elsewhere have tended to be covert or otherwise kept beneath the public’s radar, this new phase of warfare has been launched alongside an explicit plea for popular backing.  Should that support vanish—either now or in the future—then the whole edifice of Obama’s counter-terrorism foreign policy could be called into question.  The implications will be far-reaching, lasting well beyond the final two years of this administration.