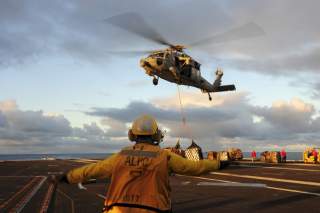 Yes, President Obama should surely be congratulated for “doing something” in the South China Sea. But those somethings, a strategically confusing freedom of navigation operation (or maybe innocent passage?) near Subi Reef and now a B-52 flight near the Spratly Islands, is proof positive of how bungled the so-called “pivot” or “rebalance” to Asia has become. In the end, while Washington’s challenge to Beijing’s adventurism in the South China Sea is surely needed, such actions may be too little, too confusing and too late.

The facts are obvious—America’s position in Asia is quite grim. Short of kinetic conflict (think war), and if current trends are not altered—by say a Chinese economic collapse or somehow American policy in Asia changing dramatically in the next few months—Washington will not be able to stop Beijing from eventually dominating the South China Sea. Put bluntly: there is no good way to put the proverbial slices back on the salami. And almost all of the blame rests on President Obama’s shoulders.

Obama, The “Pivot” and the Makings of a Disaster

It never had to be this way. The Obama administration’s so-called “pivot” or “rebalance” to Asia was suppose to be the start of a welcomed reboot of U.S. foreign policy—a move away from the black hole of national security nightmares known as the Middle East and towards the economic opportunities and challenges of the future in the Asia-Pacific and wider Indo-Pacific region. And for all the promise, all the photo-ops, all the speeches, the pivot has fallen flat—while China is now poised to gain mastery of the South China Sea, a waterway that moves over $5 trillion dollars of seaborne trade ($1 trillion of which is U.S. goods) per year.

Where Did It Go Wrong? Enter Scarborough Shoal

If the pivot to Asia was to achieve one thing, and one thing only, it would be to support and reinforce existing alliance structures while at the same time help shape China’s peaceful rise—and restrain any ideas of altering the status quo. If the pivot were truly conceptualized in this way, at least in theory, anytime Beijing undertook an aggressive action, especially an action that could alter the status quo, Washington would ensure that China’s coercive moves were restrained in some way. So if we are to pick a starting point where the pivot went from grandiose words to meaningless slogans it was Washington’s failure to stop Chinese actions at Scarborough Shoal, well within the Philippines’s Exclusive Economic Zone (EEZ). As Ely Ratner, now a senior adviser to Vice President Joe Biden, explained in these very pages back in 2013:

“After weeks of discussions, demarches and negotiations, U.S. officials in mid-June brokered what they thought was a deal for a mutual withdrawal. Exhausted, outnumbered and lacking viable alternatives, Manila withdrew its remaining ships under the facing-saving auspices of an oncoming typhoon. China, on the other hand, failed to comply with the agreed-upon deadline and retained its maritime vessels at the shoal, where they remain today on near-constant patrol.”

Ratner goes on to conclude:

“Scarborough Reef was a tactical victory for China, but it also revealed Beijing’s formula of exploiting weaker states, dividing multilateral institutions and keeping the United States on the sidelines. To stem the dangerous trend of mounting Chinese assertiveness in its near seas, Washington should focus on building partner capacity, strengthening regional institutions and ultimately making clear to Beijing that the “Scarborough Model” will no longer be cost-free.”

Sadly, we did not take Mr. Ratner’s advice.

How Does America Regain the Initiative?

There is no way to undo the damage that has been done from the Obama Administration's failure to at least attempt to restrain China’s aggressive actions over the last several years. Such actions—Beijing essentially declaring the South China Sea sovereign territory on various occasions, an ADIZ in the East China Sea, oil rigs off of Vietnam’s coast, island building in the South China Sea that could limit the time honored tradition of freedom of navigation and the militarization of these islands etc.—are slowly undoing the status quo in Asia. As Dean Cheng from the Heritage Foundation noted in a recent op-ed, Washington seems to be retreating in the South China Sea and indeed sending a message that America essentially accepts Chinese actions.

While things look grim, there are ways to limit the damage and get Beijing to think twice about further actions going forward. It’s time to make clear to China that if they are hell-bent on changing the status quo, America does not have to respect its so-called “core interests” either. As I wrote back in May on RealClearWorld:

"If Beijing wants to raise the stakes in the South China Sea, it should know its actions will have repercussions across the region—even in the areas it holds most dear…

For example, if Taiwan wishes to enhance its own military with progress toward new conventional submarines, or by purchasing updated F-16 or even F-35 aircraft, Washington should help. America could even float the possibility of large arms sales agreements with Vietnam and the Philippines as a way to level the playing field. Washington could also speak out to a much greater extent on human rights abuses in China - specifically in Tibet and Xinjiang. Regular invitations to the White House for the Dali Lama and Chinese human rights activists would certainly get Beijing's attention.”

America clearly has many tools at its disposal when it comes to raising the costs of Chinese coercive actions in Asia that could work as a restraint, but will this administration use any of them before it's too late?