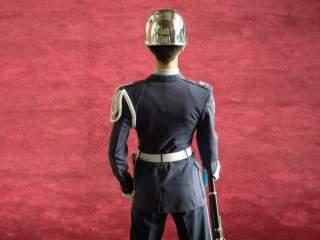 Fast on the heels of the COP21 climate change conference, the Obama administration announced its first, and likely last, arms sale to Taiwan in this term. Totaling some $1.83 billion, the sale will include two decommissioned frigates, Javelin and TOW-2B anti-tank missiles, Stinger man-portable anti-aircraft missiles, amphibious vehicles and various support equipment.

While the decision to sell arms to an American friend is welcome, it raises the question of what the administration actually intends to do. While these systems are helpful in sustaining Taiwan, they do not address two of the most fundamental imbalances in the cross-strait security situation: the air and undersea situations.

In 2010, the American Defense Intelligence Agency submitted a report that indicated the balance of airpower over the Taiwan Strait was steadily sliding in favor of the People’s Republic of China. The situation has not improved, half a decade later. As China continues to add Generation 4.5 and fifth-generation fighters (including the J-20 and J-31 fighters) to its air force, Taiwan has had to make do with older versions of the F-16. Efforts to obtain additional F-16s to replace their 1960s-vintage F-5s have come to naught. Instead, since 2010, the only fighter program the Obama Administration has approved was a modernization package for the island’s F-16A/Bs.

Meanwhile, despite the welcome addition of two more frigates, the balance of sea power in the Taiwan Strait is also steadily shifting against Taiwan. China has been adding an array of new surface combatants, as well as serial production of several modern classes of submarines. Chinese long-range Naval Aviation aircraft have now begun to fly missions into the central Pacific, signaling that the waters east of Taiwan are no longer a sanctuary.

By contrast, Taiwan’s submarine force is largely centered on two World War II era submarines, whose continued operation is a tribute to Taiwan’s shipwrights and engineers, but whose age imposes daunting demands upon its sailors to challenge growing Chinese sea power. The announced sale apparently does not address the need to permit American companies to aid Taiwan in its bid to build its own submarines.

As important, such a sale does little to demonstrate American credibility. While some might posit that this sale was intended to curtail bad feelings in Beijing, the reality is that the approach taken seems almost calculated to antagonize the Chinese. Coming in the wake of the climate change conference, it would appear that the United States delayed any announcement so as to not jeopardize Chinese “cooperation” in those talks. But the Chinese have a long memory. Does the administration really believe that the Chinese were unaware of an impending sale? Or that China would not extract some kind of price for the sale, especially if the U.S. is so desperate to gain Chinese support for a climate change agreement?

Indeed, the lack of substantial sales in systems that might make a difference in the actual cross-strait balance raises the question of whether, in fact, a quid pro quo was in place. If the administration had wanted to signal its resolve or simply exploit the opportunity post-COP21, it could have pushed for a larger sale, given that the Chinese would protest an arms sales in any case, whatever was actually sold.

Instead, the administration is fumbling away its credibility in Asia as evidenced not only by the arms sale, but also by yet another apparently bungled freedom of navigation operation (FONOP). The administration hastened to “explain” a recent flight near disputed Cuarteron Reef, saying that the flight near the Chinese artificial island was “unintentional.” Coming after the USS Lassen’s not-quite-FONOP, Beijing should be forgiven for thinking that it is being given a free-hand in the western Pacific.

This is a remarkably dangerous signal to be sending, given the impending potential for heightened tension in the Taiwan Strait, after next year’s elections on the island. At present, the opposition Democratic Progressive Party (DPP) is the odds-on favorite to win the presidency. It is not clear how Beijing will react, given the DPP’s longstanding support for greater autonomy for the island—but there is little reason to think that Beijing will pursue a more restrained approach if it believes that Washington lacks the resolve to respond.

Dean Cheng is research fellow on Chinese political and security affairs at The Heritage Foundation. This article first appeared at the Daily Signal.