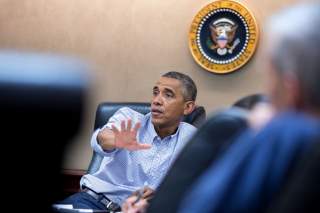 In a major policy address at American University, President Barack Obama made his best case on behalf of the Joint Comprehensive Plan of Action (JCPOA) between the P5+1 (China, France, Germany, Russia, United Kingdom, and United States) and Iran. The agreement is intended to “ensure the exclusively peaceful nature of Iran’s nuclear program” in exchange for the comprehensive listing of all multilateral and national sanctions related to that program.

The most stark and substantial claim made by the president and his senior advisers over the past two weeks is that Congress and the world faces a binary choice: either implement the JCPOA, or prepare for a war with Iran. On Tuesday, Obama made this claim twice:

Congressional rejection of this deal leaves any U.S. administration that is absolutely committed to preventing Iran from getting a nuclear weapon with one option, another war in the Middle East. I say this not to be provocative, I am stating a fact. Without this deal, Iran will be in a position, however tough our rhetoric may be, to steadily advance its capabilities. Its breakout time, which is already fairly small, could shrink to near zero.

The choice we face is ultimately between diplomacy or some form of war. Maybe not tomorrow, maybe not three months from now, but soon.

There are a number of reasons why, given the costs and consequences of alternative scenarios, the JCPOA should be supported and implemented. However, repeating the claim that there are only two choices—the JCPOA or war—is a false dichotomy that the Obama administration should refrain from making any longer. There are simply too many assumptions about the future decisions of Iran’s Supreme Leader Ayatollah Ali Khamenei that must be true for this hypothesis to be correct.

The hypothesis assumes that if the JCPOA is rejected, Khamenei will immediately reverse course from 2003—when the U.S. Intelligence Community judged “with high confidence” that Iran “halted its nuclear weapons program”—and direct Iran’s nuclear scientists and military leaders to initiate a crash program to enrich uranium and perfect the weaponization of a bomb.

I have not heard a good explanation from the Obama administration why the supreme leader would make this choice given it would further catalyze international opposition to Iran, at a time when the country is finally about to enjoy sanctions relief. Recall, Director of National Intelligence James Clapper stated in January 2012 that “the supreme leader himself…would base that on a cost-benefit analysis in terms of—I don’t think you want a nuclear weapon at any price.”

If, as Clapper acknowledged, the supreme leader makes rational cost-benefit decisions on such strategic matters, why would he order the pursuit of a nuclear weapon, which would further harm Iran economically and assuredly invite a sustained bombing campaign against Iran’s integrated air defense system, ballistic missile sites, and all known and suspected nuclear sites? Note also that Khamenei cannot assume that he could make such an order secretly, since U.S. and Israeli officials have stated that they believe they would detect it. As the then-Israeli defense minister touted in 2012: “If [Khamenei] tries to order, we will know it, we and you and some other intelligence services will know about it and it might end up with a physical action against it.”

There is the real possibility that, if the JCPOA is not implemented, Iran would continue its civilian nuclear program, cooperate to varying degrees of credibility with the International Atomic Energy Agency (IAEA), and simply decide to be a nuclear weapons threshold state, like dozens of other countries in the world. In fact, maintaining such a posture of nuclear uncertainty would provide a greater degree of influence in the region and perhaps protect the regime in Tehran—these were the reasons why Saddam Hussein, he claimed, maintained the fiction of his own country’s WMD programs. Moreover, being a threshold state and not an overt nuclear weapons power would make international opposition to Iran far less cohesive and intense, especially since many political leaders have the 2003 Iraq WMD mistake in mind.

Predicting leadership intentions is inherently difficult, and the Obama administration should not assume that it can do so accurately for Iran’s supreme leader. Again, there are many better and more convincing reasons for supporting the JCPOA. Repeating the false dichotomy that it is either this diplomatic agreement or certain war is not one of them.