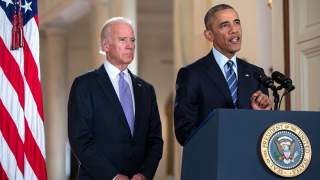 In his press conference on Wednesday, President Obama said that his deal with Iran is the best outcome that could be achieved.  History proves otherwise.  Unlike past successful non-proliferation efforts with respect to states seeking nuclear weapons, this deal moves Iran further down the path toward obtaining a nuclear weapon. Indeed, the deal actually recognizes Iran’s "right" to enrich uranium and Iran will keep at least five thousand nuclear centrifuges spinning into the future. Six previous United Nations Security Council Resolutions stated the opposite. Iran flouted those resolutions and is now being rewarded for its clandestine and illegal nuclear enrichment activity.

When South Africa, for example, ended its nuclear weapons program in 1992, it not only dismantled its weapons stockpile, the country completely shut down its entire nuclear weapons program under IAEA supervision. When Libya came clean on its weapons of mass destruction program, it turned over every scrap of illegal material and dismantled its weapons making infrastructure. Not so here. Iran will keep the Fordow bunker “for nuclear research.” It will keep its Arak reactor (albeit, modified) and all other illicit sites it developed to build an atom bomb. South Africa and Libya were non-proliferation success stories. This Iran deal is not.

Iran is a sworn enemy of the United States. It is a revolutionary regime that is committed to changing the contours of the entire Middle East and destroying America’s key regional ally, Israel. Iran has held American diplomats hostage, currently holds Americans, including journalists, hostage and has killed hundreds of American servicemen and women in Lebanon, Iraq and Afghanistan, directly or through proxies, since taking power. There is simply no evidence to support the idea that we can trust revolutionary Iran to give up its long-term goal of developing a nuclear weapon and delivery systems.

In addition to legitimizing Iran’s now supposedly "peaceful" atomic program, the deal will likely lead to a nuclear arms race in the Middle East. It is hard to imagine that Sunni states such as Egypt, Turkey and, especially, Saudi Arabia, will not immediately begin the process of procuring nuclear arms on their own or from a sympathetic third country like Pakistan to counter Iran, which will in essence be an internationally recognized nuclear threshold state.

Further, Iran will receive tens of billions of dollars in sanctions relief. In addition to expanding its own military forces, there is no doubt that much of that money will be funneled to Iranian proxies such as Hezbollah in Lebanon, the Assad regime in Syria, Shia militias in Iraq and Houthis rebels in Yemen, not to mention Hamas in Gaza, which Iran has supported in the past. All of these groups are at war with or threaten America's friends and allies in the region. The economics of this deal will surely increase the volatility of an already dangerous region.

President Obama claims that without this deal, the current sanctions regime covering Iran would have crumbled. This claim strains credulity. Nations that wanted to drop sanctions and trade with Iran would face the prospect of being frozen out of world banking and trade systems. Siding with Iran over America and her fifty plus allies around the world, not to mention most Arab states, which have the same interest as America in keeping up pressure on Iran, would be an unlikely step for most nations. However, when Iran is discovered to have flouted this deal just as it has flouted UN sanctions and the Non Proliferation Treaty over the years, it will be difficult to reimpose crippling sanctions on Tehran. The bottom line is that it’s far less likely that “snap back” sanctions will ever be imposed on Iran than the current sanctions regime would have crumbled.

It is unprecedented that President Obama is taking this major and likely damaging step in the foreign policy arena with absolutely no bipartisan support. This deal with revolutionary Iran will be opposed by all leading Republican candidates for president. It will be overwhelmingly rejected by Republican members of the House and Senate. Our closest ally in the region and the Middle East’s only true democracy, Israel, is dead set against deal. The same is true for our key Arab allies. In response, the president in his press conference lumped Israeli Prime Minister Netanyahu, “the Israeli Ambassador” and “the Republican Leadership” into a group that must argue for a new Middle Eastern “war” as the only viable alternative to his deal with Iran’s Supreme Leader. This straw man argument that America only has a choice between the president’s weak deal and “war” is so discredited as to no longer merit a serious response.

After Prime Minister Chamberlain signed the Munich Accords with the Supreme Leader of another ideological and cruel regime, Winston Churchill said in Parliament that the British people “should know that we have sustained a defeat without a war, the consequences of which will travel far with us along our road..." Sadly, his prophetic warning in 1938 appears to be applicable to us today.

Robert C. O'Brien is the California Managing Partner of a national law firm. He served as a US Representative to the United Nations.  He is a Senior Advisor to Governor Scott Walker. His writings on foreign policy and national security are available at www.robertcobrien.com. He can be followed on Twitter: @robertcobrien.