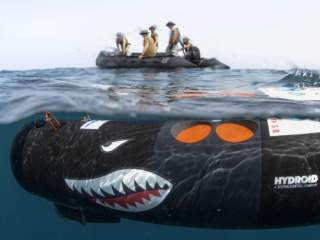 Mine-hunting mini-subs, unmanned swarms, and human-machine “centaurs.” These are the weird and dangerous “advanced capabilities” Robert Work is intent on developing to defend America in an age of the rapid obsolescence of weapons systems.

While a “lead from behind” Barack Obama has generally received low marks as commander-in-chief—from Afghanistan, Iraq and Syria to “Honey, I shrunk the naval fleet”—the president certainly can’t be faulted for appointing Robert Work as his Deputy Secretary of Defense. Work is second in command at the Pentagon, “Chief Operating Officer” of one of the world’s largest and most complex bureaucracies, and a “soldier’s soldier,” with twenty-seven years in the marines before retirement.

Cut from similar cloth as the legendary Andy Marshall, Work’s special gift is an unusual command of the emerging battlefield in an age of rapid technological change. Work’s Holy Grail as he grapples with a severely constrained military budget is finding an effective “Third Offset Strategy” capable of staying at least two steps ahead of the five major enemies Work identifies on his four-dimensional chessboard: China, Iran, North Korea, Russia and the trans-national threat of ISIS.

The concept of an “offset strategy” is just the opposite of Stalin’s famous admonition that “quantity has a quality all its own.” The strategic counter-idea is to “offset” some numerical advantage of the enemy in a technologically elegant way.

America’s “First Offset Strategy” involved President Dwight D. Eisenhower’s threat of using a superior nuclear arsenal to neutralize the Soviet Union’s Eastern Bloc advantage in troops, tanks, and materiel. Once the Soviets could match the U.S. nuclear arsenal, the United States then shifted to a “Second Offset Strategy” that relied more on conventional, but technologically superior, precision-guided weapons and computerized command and control.

Robert Work’s twenty-first century search for a Third Offset Strategy is driven by this sobering recognition: The repetitive cycles of weapons superiority the United States has relied on for decades is becoming shorter and shorter as America’s enemies develop—and often steal—the cutting edge technologies that have constituted the U.S. advantage.

The meta-problem here as Work has framed it is this: Whatever initial advantage the United States may gain from its ability to lead at the technological edge quickly evaporates because of fast followers. For example, America virtually invented the use of drones as a weapon of war. However, the technology has quickly spread to America’s matrix of enemies through vectors like reverse engineering, traditional spycraft, and advanced cyber espionage.

That is exactly why the world of Robert Work, by definition, must indeed be weird, operating as he does at the edge of science and science fiction where advanced capabilities must be developed and eventually deployed. Unfortunately, Work is also operating within the severe budget sequestration constraints he has been saddled with. He is therefore pursuing a “seed corn” strategy to at least develop a set of advanced capability prototypes that it will be the job of the next White House to approve and somehow fund.

As to what prototypes might wind up in Work’s weird arsenal? Unlike some loose lips within the Pentagon, Work has the good sense not to reveal too much about what the American arsenal might morph into—remember the existence of “stealth” was not even revealed until decades after it was in use.

All we know at this point is that Work is big on all manner of unmanned technologies—from robot planes large and small to drone ships above and beneath the sea. However, Work’s also strongly gravitates towards the concept of “human-machine centaurs.”

These are weapons systems that are part human and part machine like the fabled half-man, half-horse centaurs of Greek mythology. The central idea, which elegantly resolves the debate over manned versus unmanned systems, is that a human-machine centaur will be far more than the sum of its manned or unmanned parts.

A case in point is the aforementioned F-35. Work sees it not so much as a fighter plane per se but rather as a “flying sensor/computer” lifting its pilot to new strategic and tactical heights.

Deputy Secretary Work, and his Pentagon boss Ashton Carter, are also big on leveraging small to medium sized tech companies rather than casting their contracting lot entirely with the Lockheed Martins and Raytheons of a black and white, “I like Ike,” military-industrial complex world. That’s why the Carter-Work duo have set up a “Pentagon outreach” office in Silicon Valley dubbed the “Defense Innovation Unit—Experimental.” Its key mission: “scout for breakthrough and emerging technologies.”

In the end, what we know about the world is that it is rapidly becoming a much more dangerous place. What we know about Robert Work is that he is seeking a Third Offset Strategy to address the emerging threats.

If Work truly does his job, we the public will likely never fully know what weapons systems the Pentagon is deploying, and America will remain safe. If Work fails, it will likely have more to do with lack of support from a 2017 White House that remains very much up for grabs—which is precisely why issues like national security should be at center stage in the presidential debate.